Subscribe
Home / California / Sustaining the tradition of ranching in California 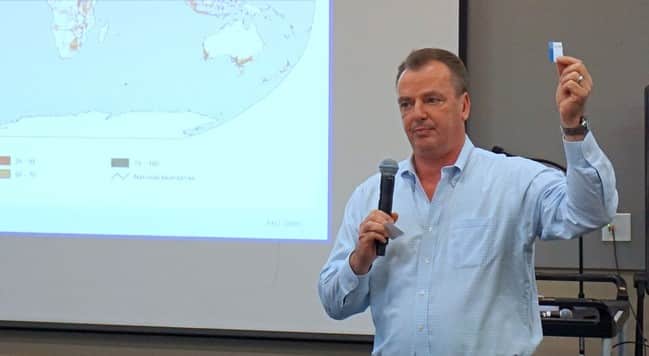 UC Cooperative Extension specialist Frank Mitloehner holds a small part of a business card, which represents all land on the planet available to grow plants, if the surface of the earth were represented by a letter-sized sheet of paper. (Photo: UC ANR)

STOCKTON, Calif. — Ranching has a long history in California, starting when Spanish missions were established in the early 1700s, continuing as ranchos under Mexican rule, and persisting as a solid industry today with about 38 million acres of range and pasture lands in the state.

Those rangelands produce much more than beef. California’s water flows from the land, healthy soil and grass sequester carbon, and wildlife thrives alongside the revenue-generating cattle. Rangeland also has a significant esthetic value. Green rolling hills in the spring, dotted with stately oaks, paint an iconic California scene.

At the annual Rangeland Summit held by UC Cooperative Extension and the California Rangeland Conservation Coalition in January, scientists, ranchers and conservation organizations focused on sustaining this part of the state’s agricultural tradition to ensure that the environmental benefits, the verdant beauty and the rural Western lifestyle never fade away.

“UC Cooperative Extension, ranchers, farm bureaus, private land preservation agencies, California Fish and Wildlife and other organizations all work together to protect rangelands we value. Our strength is in the different walks of life we represent,” said Theresa Becchetti, UCCE livestock and natural resources advisor for Stanislaus and San Joaquin counties and conference co-chair.

However, since 1984, California has lost 1.5 million acres of irrigated agriculture and rangeland, said summit presenter Keali’I Bright, assistant director of the California Department of Conservation. Between 2014 and 2016, 130,000 acres of grazing lands were converted to orchards or vineyards.

“Why are lands changing?” Bright asked. “The population is increasing, and, driven by cost of living, there’s a drastically changing commute tolerance and different transportation options.”

The role of beef in climate change

Another threat to the long-term viability of cattle ranches is the potential for beef market shrinkage due to consumer concerns about the industry’s environmental impact and greenhouse gas emissions. UCCE specialist Frank Mitloehner told ranchers at the summit he believes beef is getting a bad rap.

“People say we should get rid of livestock,” Mitloehner said.

Mitloehner believes Americans cannot eat their way out of the climate change crisis. Switching from omnivore to vegan for a year reduces an individual’s carbon footprint by .8 tons. A single transatlantic flight adds 1.6 tons of carbon per passenger to the atmosphere. If all residents of the United States became vegan overnight, the greenhouse gas reduction is a mere 2.6%, Mitloehner said. And if all Americans adopted Meatless Monday, greenhouse gas emissions would drop by just one-half of one percent.

According to the U.S. Environmental Protection Agency, the largest sources of U.S. greenhouse gas emissions in 2016 were electricity production (28 percent), transportation (28 percent) and industry (22 percent). All of agriculture accounted for a total of 9 percent.

Mitloehner also questioned the long-term viability of plant-based hamburger substitutes that taste like meat, such as Impossible Burger and Beyond Burger.

“Certainly, they have a lower environmental footprint when compared to meat burgers,” he said. “But they are not veggies of the vine. They are made of ultra-processed ingredients. I think that’s the soft underbellies of these companies.”

Mitloehner, whose Twitter handle – @ghgguru – stands for “greenhouse gas guru,” said the environmental footprint of America’s diet can best be addressed by reducing food waste. Food production, processing and distribution is a contributor to emissions, and discarded food and plant matter in an anaerobic environment, such as a landfill, initiates a chemical reaction that releases methane, a greenhouse gas.

“Forty percent of all food never makes it to the human digestive tract,” he said. “More than half of fruit and vegetables are wasted, and farms are not where it happens. The majority of food waste is at the consumer level.”

UC Cooperative Extension livestock and range advisor Dan Macon said grazing must be well managed and the animals must be tended by professional herders to be effective fuel reducers. An agriculture overtime rule passed last year by the California Legislature is a new burr under the saddle for ranchers. The law, Assembly Bill 1066, will increase herder wages by 50 percent.

“This level of compensation is unaffordable for our producers,” said Macon, who is also the president of California Wool Growers Association.

To increase the amount of targeted grazing for fire fuels reduction, Macon said there should be a focus on public outreach and education.

UC Cooperative Extension is active in many parts of the state to form public-private associations to conduct prescribed burning on rangeland to prevent catastrophic wildfire.  UCCE livestock and range management advisor Matthew Shapero is working with ranchers to revive a “burn culture” in Santa Barbara and Ventura counties. Lenya Quinn-Davidson, UCCE area fire advisor in Humboldt County, is on the curriculum development committee for a California state-certified prescribed-fire burn boss program. Quinn-Davidson and Jeff Stackhouse, UCCE livestock and natural resources advisor in Humboldt County, have established a prescribed burn association in Humboldt County and are training colleagues across the state how to organize ranchers, urban residents, fire departments and other agencies to work together to protect natural resources and cities.

Passing the ranch to the next generation

Another hurdle to long-term rangeland sustainability is managing succession. Rick, Carolyn and their son Weston Roberti, representing the fourth and fifth generations of the family who manage the Roberti Ranch in Sierra Valley, spoke about how their family is managing a ranch passed down through generations. Sierra Valley is a high mountain valley near Truckee that was settled by Swiss immigrants who came to California during the Gold Rush.

“They went through hard times,” Roberti said. “Of hundreds of immigrant families who tried to make it as cattle ranchers in Sierra Valley, there are now just six.”

Over time, new generations of the family decide to leave the ranch or stay on to continue a traditional ranching career. Weston went to college at Chico State, but returned to work on the ranch with his father, brother, uncles and cousins. A sister took a job in Sacramento.

Keeping a ranch in a growing family requires communication, cooperation, planning, and, to overcome the inevitable disagreements, a shared faith, said Weston Roberti.