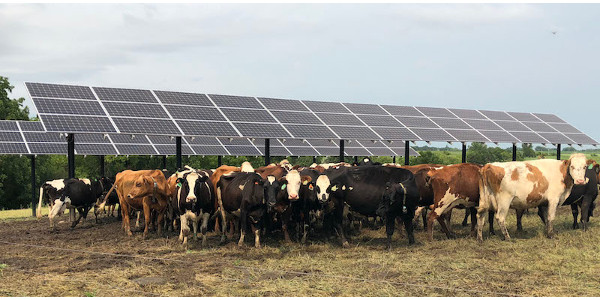 MANHATTAN, Kan. — The pre-show dinner at this year’s Golden Globes may have featured a “plant-based feast,” but it came with a side of red meat for those who believe the people who grow and raise our food are a driving force in climate change. As with most things in Hollywood, truth was sacrificed for the story.

“The climate crisis is impossible to ignore and after speaking with our peers, and friends in the community, we felt challenged to do better,” Lorenzo Soria, president of the organization behind the awards show, told CNN. She also noted the gesture “represents a small step in response to a big problem.”

I don’t want to litigate the intricacies of climate change here. Rather I want to highlight how farmers and ranchers in the United States are at the leading edge of reducing so-called greenhouse gas emissions (GHGs), like carbon dioxide and methane, from their operations.

U.S. agriculture is responsible for just 9 percent of the nation’s emissions, an amount that pales in comparison to those spewed from vehicles and electric power generation.

Carbon is an important component of soil health. That’s why farmers are using innovative practices like conservation tillage, no-till, cover crops and adding amendments like biochar which increase the amount of carbon stored in soil. Growers also are keenly aware of the cost to operate tractors, combines, trucks and other farm equipment and continue to invest in fuel-efficient machinery.

Livestock producers, especially cattle ranchers, are often unfairly blamed for GHGs when cows have been responsible for less than 3 percent of emissions in the last 30 years. Cattle are the original plant-based meat, meaning they efficiently convert forbs and grasses unfit for human consumption into high-quality, protein-packed morsels.

Just like with human nutrition, the quality of forage makes a significant difference for livestock. One recent study found pigs, cattle, poultry and small ruminants in low-income countries require far more food – and produce more emissions as a result – than similar animals in developed countries. Kansas in particular has some outstanding grazing ground.

Producers also are capturing methane from manure to power their operations, placing land in conservation programs to preserve green spaces and using rotational grazing which lessen the strain on the land.

Global food production will need to increase by 30 to 40 percent to nourish an estimated population of 9.3 billion people in 2050. The growing population will be richer and more urban, increasing the demand for animal-based protein.

The best way to meet the increasing demand is for American farmers and ranchers, the most efficient producers in the world, to continue working at the forefront of climate-smart production. They have a vested interest in using scientific solutions, technology and innovation to work to protect the air, land and water.

However, they can’t tackle climate change by themselves. We all must push for investments in agricultural research and innovation so our farmers and ranchers can continue implementing sustainable solutions to feed the world.