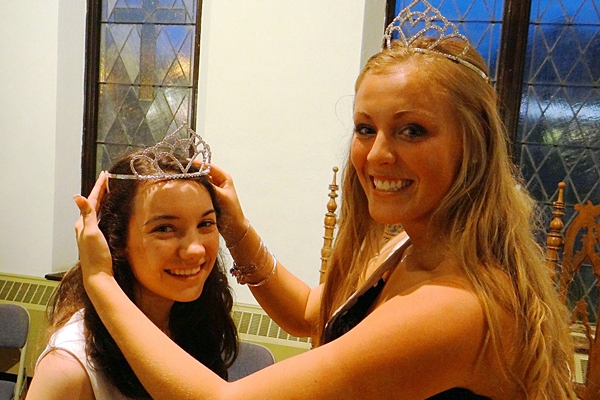 Michayla is the daughter of John and Rachel Stahl and is completing her sophomore year at Montrose Area High School. Michayla gets her dairy background working at Castlemont Dairy Farm and being a 4-H dairy project member. Both Vicki and Dana attend Elk Lake High School completing their sophomore years. Vicki, daughter of Charlie and Kim Clark live on her families’ dairy farm spending many hours helping on the farm. Dana, daughter of Dwight and Joan Nunemacher has completed two years serving as a Dairy Ambassador and ready to continue another year of dairy promotion here in Susquehanna County as an Alternate Princess.

During her reign, Dairy Princess Michayla Stahl will fulfill her duties with the help of Dairy Maids Kaelynn Brant, Katelyn Farley and Courtney Marvin and Dairy Ambassadors Alivia Hughes, Mary Catherine Chidester, Kendra Brant, Elizabeth Chidester and the Alternate Princesses. This team of dairy promoters will be working together educating both adults and young children and everyone in between about the importance of dairy products being part of their diet as well as being advocates for Susquehanna County dairy farmers.

2010 Dairy Princess Olivia Mitchell Zawiski introduced each Dairy Maid, Dairy Ambassador and the Dairy Princess Candidates to step forward to make comments about the dairy industry and speak a bit about how they will be fulfilling their responsibilities as a member of the dairy promotion team.

1980 Dairy Princess Betsy Arnold presented outgoing Princess Brooke Marvin with a scholarship award provided by the county dairy promotion committee as she will begin college in the fall at LeMoyne College duel degree partnership in nursing with St. Joseph’s College of Nursing to become a family health nurse practitioner. Betsy also being a Susquehanna County Commissioner thanked all of the girls for their dedication supporting dairy farmers.

Princess Brooke Marvin commented on the more than 400 dairy promotions she and members of the 2016/2017 dairy promotion team did throughout her reign as Dairy Princess.

PA State Dairy Princess Halee Wasson and State Alternate Princess Katie Anderson were special guests at Pageant and each commented on the value of the dairy promotion program.

Brooke gave an emotional farewell speech complementing the members of her court on the excellent job they did working with her during the past year and wished the new Dairy Princess Michayla Stahl, Alternate Princesses Dana Nunemacher and Vicki Clark and all of the Dairy Maids and Dairy Ambassadors on the Susquehanna County Dairy Promotion Court a banner year of promoting dairy.

For more information on the Susquehanna County Dairy Princess Program or to schedule an event, contact Evie Goff at 570-278-1212 or gofffarm@epix.net or our new Dairy Princess Michayla Stahl.