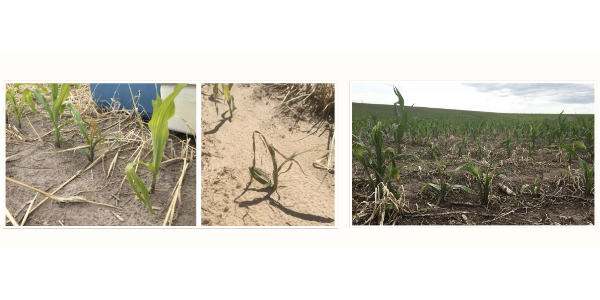 LINCOLN — On May 30 a number of agricultural professionals across central and eastern Nebraska reported insects damaging corn following rye and wheat cover crops. At the time of sampling, corn plants were in the V2-V4 stage exhibiting “dead heart” symptoms. Infested plants became more evident within one to two weeks of the initial symptoms with little to no growth or excessive tillering (Figure 1). A number of these symptomatic plants were sampled and dissected, revealing small larvae, suspected to be wheat stem maggot (WSM) Meromyza americana (Figure 2). This is not the first report of WSM in corn in Nebraska. In 2005 and 2015 similar reports were made of wheat stem maggot damaging corn and causing 5-10% stand loss in northeast Nebraska fields.

Due to the widespread damage, a survey was initiated to assess losses and identify factors common to damaged fields. Stand losses in fields ranged from 2%-30% on a whole-field basis. At each field, a total of 50 symptomatic plants were sampled with half of the plants dissected to isolate larvae and the other half transplanted to containers with cages to capture adults upon emergence for insect identification. Dissections revealed a wide range in larvae development, ranging from 3-6 mm in length, indicating multiple instars were present. In most cases, only a single maggot was found per plant, with the exception of a few plants with two maggots. Unlike reports in 2015, it appears maggots entered through the top center whorl of the plant as indicated by a feeding channel that extended down to the growing point (Figure 3). Larger larvae (5-6 mm) were found midway up the plant, suggesting movement back toward the top of the plant.

Affected corn fields ranged considerably in the timing of establishment and termination of the cover crop. In all cases, the cover crop was still alive at the time of corn planting. Terminating rye cover crops after corn planting has been suggested as a way of avoiding allelopathic effects from the rye. (See “Planting Corn into a Cereal Rye Cover Crop for more information). In most cases, the entire field was planted to a cover crop; however, a few producers had planted only small portions of the field for erosion control on field slopes. In such situations, infested and damaged plants were confined to these areas with normally developing corn plants occurring within 1-2 feet of the cover crop (Figure 4). The lack of significant spread from the cover crop suggests that larval movement between cover crop and corn may have been the primary factor for infestation.

Little to no information is available on wheat stem maggot in corn. In general, adults overwinter as larvae in the stems of host plants (wheat, rye, barley, and a number of wild grasses), pupating in early spring with adult emergence in May/June. In our survey, we were still finding larvae within corn plants sampled on June 9. WSM pupae collected from corn plants in 2015 were able to complete development and emerge as adults. It is not known if WSM can complete development when infested at early stages of their lifecycle.

We do not recommend any control measures for this year’s corn crop. This is primarily due to the inability to get any insecticidal chemistries to the insect and the fact that plant damage has already occurred. The damaged corn fields in 2015 had Poncho seed treatment rates ranging form low to high levels and did not provide effective control.

To gain a better understanding of this situation we will be conducting field studies at the Eastern Nebraska Research and Extension Center near Mead (formerly ARDC) this fall to help provide additional management recommendations.

When to apply postemergence herbicide