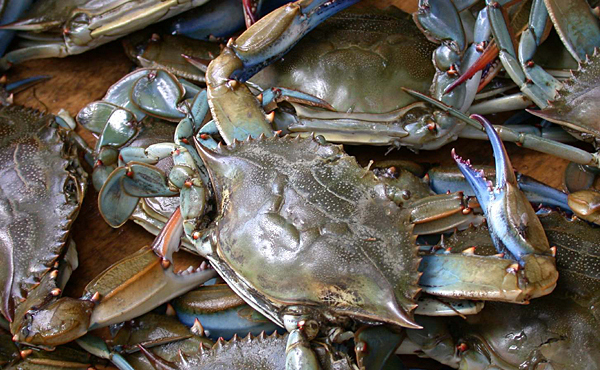 Blue crabs are rebounding in the Chesapeake Bay, with an annual survey showing the highest estimates of the clawed critters in seven years. (Wikimedia Commons)

BALTIMORE (AP) — Blue crabs are rebounding in the Chesapeake Bay, with an annual survey showing the highest estimates of the clawed critters in seven years.

The dredging survey released Monday is the latest sign of a healthy crab population and welcome news for fisherfolk in America’s largest estuary and those who love cracking into bushels of the bay’s iconic crustaceans. Feasts of blue crabs steamed in peppery seasoning or fashioned into succulent crabcakes are a beloved delicacy and one of last viable regional fisheries.

“It looks like we’re heading in the right direction,” said Robert T. Brown, president of the Maryland Watermen’s Association, a nonprofit that represents commercial fishermen and other seafood interests in the mid-Atlantic state nearly synonymous with shellfish. “I think it shows you’ve got to be conservative to get your population to increase.”

Overall, the baywide crab population rose by 60% from last year to reach an estimated total of 594 million crabs. An annual winter survey released by the states of Maryland and Virginia shows almost twice as many juveniles as last year. Adult males rose by 38 percent, or roughly 80 million. And perhaps most importantly, spawning-age females have increased, too, climbing to 190 million for a nearly 30 percent gain.

The dredging results are the latest evidence of blue crabs’ resurgence following strict harvest restrictions put in place in Maryland and Virginia in 2008 after falling to worrying lows.

“The blue crab population is both healthy and thriving, which is great news for the entire bay,” Maryland’s natural resources Secretary Jeannie Haddaway-Riccio said in a Monday statement.

Michael Luisi, Maryland’s director of fisheries monitoring and assessment, said the total tally of females “is close to our target” while the numbers of juveniles were above average. He said officials expect variability in the population of the finicky crustaceans so “taking a conservative approach offers stability for the fisheries in the face of swings in abundance.”

While mild winter temperatures helped increase survival rates for juveniles and adults, scientists say authorities certainly deserve their share of credit for efforts to reduce pollution by states in the watershed. Good fisheries management and healthy habitat are the two keys to a strong blue crab population, said Chris Moore, a senior scientist with the Chesapeake Bay Foundation.

“This is another year of positive news for crabs in the bay, thanks to wise management of the commercial and recreational fisheries for blue crabs. Increasing important blue crab habitat such as underwater grasses and oyster reefs also helps to boost the crab population,” Moore said Monday. “We hope the bay states will continue their wise management policies and water quality investments in order to maintain these promising numbers.”

Blue crabs are the Chesapeake’s biggest money maker and Maryland’s unofficial symbol, appearing on door knockers, porch flags and T-shirts. Steamed crabs have long been as much a summer tradition along the mid-Atlantic coast as baseball and trips to the beach.

Following the news about the population estimates, the office of Republican Gov. Larry Hogan issued a photo of the governor and his wife enthusiastically tucking into a bushel of steamed crabs at a local eatery.