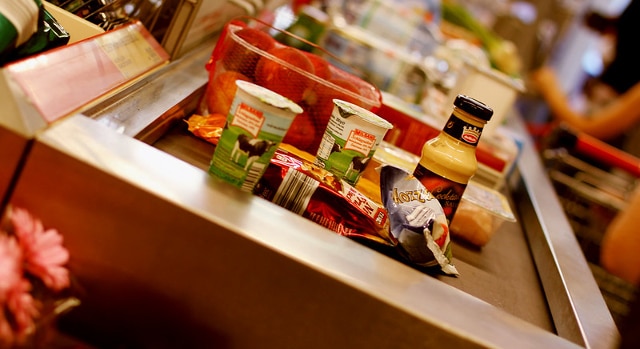 The team co-led by CSU food systems researchers Dawn Thilmany and Becca Jablonski conducted a national survey of 5,000 U.S. households this past fall. Their goal was to uncover how the pandemic is changing Americans’ food choices and try to understand if some of those changes might remain post-pandemic. (Stock photo via Max Noisa, Flickr/Creative Commons)

Nearly a year of social distancing and economic disruptions has triggered both subtle and seismic shifts in how Americans are buying or getting food, and Colorado State University researchers from the Department of Agricultural and Resource Economics have spent the last several months documenting those shifts. Their efforts are part of a $1 million cooperative study funded by the USDA Agricultural Marketing Service, in partnership with University of Kentucky and Penn State University, looking at the pandemic’s effects on local and regional food markets.

The team co-led by CSU food systems researchers Dawn Thilmany and Becca Jablonski conducted a national survey of 5,000 U.S. households this past fall. Their goal was to uncover how the pandemic is changing Americans’ food choices and try to understand if some of those changes might remain post-pandemic. That way, producers, farmers, ranchers, retailers and restaurants can adapt accordingly and focus on long-term resilience.

“We tend to see American consumers get into habits,” Thilmany said. “But COVID has got many households trying some new strategies to shop for food, many of them in support of local farms and businesses.”

Thilmany is a professor in the Department of Agricultural and Resource Economics and associate director for engaged research in CSU’s Office of Engagement. Jablonski is an assistant professor in the same department and a Food Systems Extension Economist. Both are experts in food systems, supply chains and emerging food markets.

The survey work is part of a yearlong research partnership that includes 16 national food supply chain organizations touching on various aspects of local and regional foods and how they’ve responded during the COVID-19 pandemic: from the Farmers Market Coalition, to National Co+op Grocers, to the James Beard Foundation, which represents independent restaurants.

The CSU team is publicizing their survey results via a series of digestible fact sheets available on the USDA-sponsored project website. The survey cut across key demographics and income levels and reflected the economic toll the pandemic has taken on many families. A third of the sample were considered essential workers, 25% were considered nonessential, and 43% had lost their jobs, been furloughed, or were securing less income overall.

The researchers first asked respondents about their use of food market channels ­– buying from a large grocer, a smaller retailer, or a community farm, for example. They found that 35% had tried at least one new outlet since the pandemic struck, whether it was a farmer’s market, community-supported agriculture, or a local, independent restaurant.

They asked respondents about these new shopping behaviors in three time periods – September 2019 (prior to the pandemic), April 2020 (relatively early into the pandemic) and September 2020 – to ascertain whether those new behaviors had stuck. Almost a third said they were staying with the new channels, indicating that perhaps some American consumers might permanently alter their food-buying habits even when the pandemic is over.

“One of the questions we’ve been getting a lot is how farmers and also food businesses should be making investments right now, given that we know there are these changes in how people are spending money on food,” Jablonski said. “And it’s really hard to answer that question because to some extent we don’t know if some of these changes are just going to be a blip due to COVID, or if they are going to continue post-COVID.”

Graduate student Hailey Edmondson, who is compiling the survey results, said the team’s goal is to offer as much practical information as possible for study partners, from the farm level to emerging food producers and independent restaurants.

“What types of things should they invest in moving forward? I think we found some things that will hopefully answer those questions to some extent, or provide some insight,” Edmondson said.

The researchers also asked about access to food, and found, soberingly, that 30% of respondents had experienced food insecurity since the pandemic began. Food insecurity means being unable to acquire enough food at some time during the year due to lack of money or food resources. By contrast, a 2019 survey by the USDA Economic Research Service found that 10.5% of respondents were food insecure.

The CSU researchers found that food-insecure respondents were more likely to garden or grow their own food than food-secure respondents. After gardening or growing, using funds from the federal Supplemental Nutrition Assistance Program (formerly known as food stamps) was the second most common method of acquiring food from those who reported food insecurity.

The team is also in the midst of a Denver-area survey focused on food-insecure populations, as well as a Colorado-wide survey about food-buying, similar to the national survey they completed in the fall.

The team is delving into other aspects of consumer food buying, including a major turn toward online purchasing across the board, but particularly with larger supercenters like Walmart. They found that some people were choosing smaller stores for their in-person shopping, “but the supercenters have the delivery game more honed, so we are exploring ways for more independent retailers to stay competitive,” Thilmany said.

Not surprisingly, the youngest respondents (18-44) reported a higher use of online shopping than other groups, although all age groups had overall growth in this area.

Thilmany said the CSU team is dedicated to providing guidance to smaller markets as the pandemic continues, so they can make data-based decisions on how to accommodate new customers.

“So much programming out of USDA is focused on the health of commodity markets and larger producers, but the pandemic has hit these smaller markets so differently that some guidance that is more reflective of their challenges was needed, so this study is the USDA response,” Thilmany said.

The team is also trying to help the restaurant industry with creative solutions to the temporary and permanent changes COVID has wrought. “That is the industry absolutely hit the hardest, and policymakers are scratching their heads,” Thilmany said.

As part of the yearlong study, the CSU researchers are beginning to explore innovative food delivery models like NoCo Nosh that allow for more local control of how online orders are managed, and they are brainstorming how agencies could support development of such platforms. They’re also looking at how restaurants could partner with local food banks to make cost-effective meals that serve communities while also helping the restaurants stay in business.

“We will need some clever policymakers to come in with this new administration,” Thilmany said.

Follow the team’s ongoing work, including more fact sheets from their fall 2020 survey, at their project website.