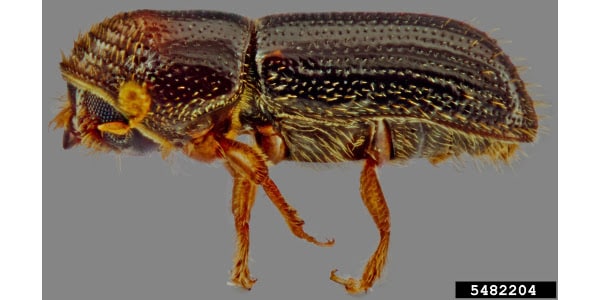 LINCOLN — The Nebraska Department of Agriculture (NDA) will begin another year of surveillance work for the walnut twig beetle (WTB) this month.  The beetle, combined with the fungus it carries, causes thousand cankers disease (TCD) in walnut trees and was discovered in Scotts Bluff County during last year’s surveillance work.

The WTB is native to North America and is the only insect presently known to transmit the fungus that causes TCD. The disease disrupts the flow of water and nutrients, ultimately causing the infected walnut tree to die. Early symptoms are yellowing of leaves and foliage thinning of the upper crown of the tree. Trees usually die within three years after initial symptoms are observed.

“The Nebraska Department of Agriculture will continue to survey the state, watch for signs of this invasive pest and do what we can to help slow its spread into un-infested areas,” said NDA Director Steve Wellman.

NDA entomology staff will begin yearly survey work for WTB this month. While the survey work will occur statewide, an emphasis will be made to closely monitor Scotts Bluff and surrounding counties.  Information gathered from this year’s survey will be used to help determine if changes are necessary to Nebraska’s quarantine orders in the future.

Since WTB and TCD can be easily transported in wood, people can personally help prevent the spread of invasive pests by using locally-sourced firewood and burning it in the same county where you purchase it. Also, consider removing trees that are experiencing declining health and dispose of them properly.

If you ship walnut nursery stock, scion wood, lumber or other walnut wood products (excluding walnut nuts), you are encouraged to contact the Nebraska Department of Agriculture at 402-471-2351 to determine if there are any restrictions or certification requirements for those products.

Additional information on WTB and thousand cankers disease, can be found on NDA’s website at: http://www.nda.nebraska.gov/plant/entomology/.