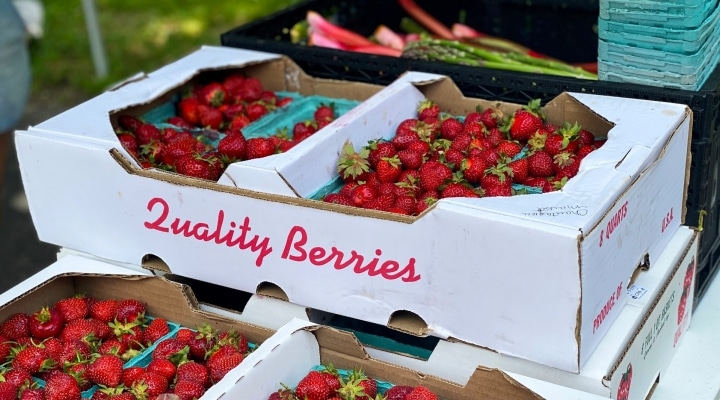 ALBANY — Nourish New York, Governor Cuomo’s initiative to get food from farmers to families in need during the COVID-19 outbreak, reached a milestone this week as the amount of surplus dairy and produce provided through New York’s food banks reached more than three million pounds. As of today, food banks have purchased more than $3.2 million in Nourish NY product from New York’s farmers and processors. This includes 1.36 million pounds of dairy products, including fluid milk, yogurt, cheese, cottage cheese, and sour cream, and more than 1.6 million pounds of produce, such as fruits and vegetables, that have been provided to more than 100,000 New York households.  There have been more than 350 Nourish NY distribution events across the state since the program was launched in May.

The Nourish New York initiative aims to quickly reroute New York’s surplus agricultural products to people who need them through the state’s food banks. The state is providing $25 million to food banks and other emergency food providers so they can buy surplus milk, yogurt, cheese, vegetables, fruit and more. The Nourish New York program also provides support to the state’s food producers who have lost markets as a result of school and restaurant closures. The program is administered by the State Department of Agriculture and Markets and the New York State Department of Health.

Lieutenant Governor Kathy Hochul highlighted the Nourish NY program today during a stop at Noblehurst Farms and Creamery in Pavilion, Genesee County, saying, “Nourish New York has connected local farmers with food banks to help struggling New Yorkers put food on the table during the COVID-19 pandemic. The state-funded initiative has delivered more than three million pounds of food and dairy from across the state to those in need since its launch in May. Nourish New York is helping to support local farms and grow the agriculture industry as we continue to work to make sure New Yorkers have the resources they need as we reopen and build back better for the post-pandemic future.”

New York State Commissioner of Agriculture Richard A. Ball said, “As the Governor has said, Nourish New York is all about connecting our farmers who can’t sell their products right now to consumers who are facing challenges in being able to buy them. The need on both sides is critical and I am pleased that Nourish New York allows us to rise to meet that need.”

Commissioner of the New York State Department of Health Dr. Howard Zucker said, “As New York State emerges from an unprecedented pandemic response and many people struggle with economic uncertainty, we need to do all we can to prevent food insecurity. Nourish NY is a win-win for New Yorkers, providing nutrition assistance for people in need and economic assistance to the state’s agricultural industry, which in turn, will be able to continue producing healthy foods throughout the state.”

Nourish New York-provided dairy and produce have been distributed in every corner of the state at events that range in size from reaching dozens of households through food pantries and community churches to large-scale drive-through events serving thousands of households, such as the event at the New York State Fairgrounds near Syracuse that reached 1,400 households and at the Westfield Mall in Massapequa that provided food to 3,500 households.

Products distributed at all events include produce such as apples, tomatoes, cabbage, and potatoes and dairy products such as milk, yogurt, cheese and more, purchased from farms and dairy processors from across New York.  As a result of the program, nearly 5 million pounds of milk from New York farms, for fluid milk and to make other finished dairy products such as cheese, cottage cheese, and sour cream, has been redirected to New York households.  In addition, New York State’s food banks have also spent nearly $226,000 on the purchase of kosher products, including milk and yogurt.

More than 100 distribution events are scheduled across the state over the next two weeks. Those events will reach an estimated 20,000 households.

Secretary of State Rossana Rosado said, “In a short period of time, Nourish New York has helped thousands of New Yorkers by putting food on the table for families from our farms across the state. Under the leadership of Governor Cuomo, Nourish New York will continue to bridge the gap between struggling families and the farming community in New York State as we move forward in our ongoing response to COVID-19.”

NYS Office of Temporary Disability Assistance Commissioner Mike Hein said, “Nourish New York has been a ray of light amid the darkness of this pandemic, helping nourish tens of thousands of food-insecure families while also aiding local farms struggling amid the upended economy. Our hope is that this initiative will continue to grow and further alleviate the burden felt by so many New Yorkers as our state embarks upon the long road to socioeconomic recovery. I applaud Governor Cuomo’s leadership to launch Nourish New York and the phenomenal spirit of cooperation among all participating agencies and organizations that have helped it become a reality.”

Chris Noble, farm partner in Craigs Creamery said, “When COVID-19 hit, we as dairy farmers temporarily lost many markets for our products, including schools and restaurants. The Governor’s Nourish NY initiative has helped local demand for milk and dairy recover more quickly by providing hunger relief for our local communities, specifically from New York farmers and food producers. We are hopeful that we can continue to build on these new supply chains by creating a local and more resilient food system.”

Kirby’s Farm Market co-owner Chad Kirby said, “I think Nourish NY is a fantastic program for the community and for farmers. It’s been a huge benefit and it has made a massive difference.”

Feeding New York Executive Director Dan Egan said, “New York’s food banks applaud Governor Cuomo’s leadership in establishing the Nourish New York program. We have rapidly created a great team of New York farmers, distributors, food bankers and State agency staff. This team is strengthening the connection between New York’s farmers and our neighbors who are in need of nutritious food. It is exactly the right response to the crisis we face, and this program is working extremely well statewide.”

Food Bank of the Southern Tier President and CEO Natasha Thompson said, “The Nourish New York program has allowed our Food Bank to incorporate more nutritious, fresh foods, like produce and dairy, into our weekly community food distributions across our six-county region.  Not only do our families appreciate these products, but we are pleased to be able to support our NYS farmers who have always been so generous to us in the past. This is truly a win-win program!”

The Nourish New York Initiative is being led by a task force, which includes: