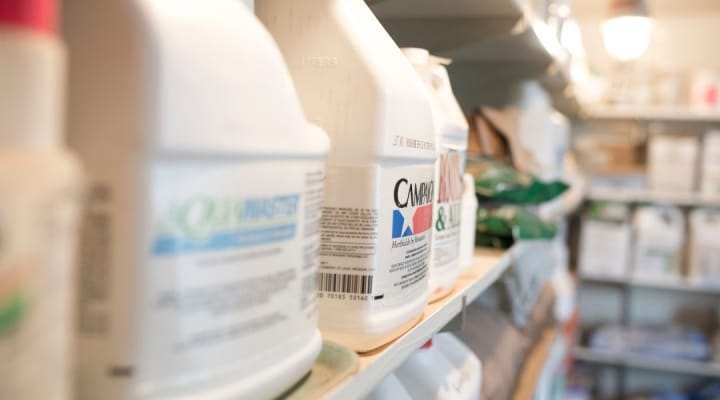 Some growers have already started acquiring pesticides for the 2022 growing season. Since most growers do not typically keep large quantities of product over the winter, this might be a new experience for some.

GOSHEN, Ind. — I talked to growers last week who have already taken early delivery of pesticides for the 2022 growing season. In most years, they would have waited until spring, but because of concerns with the supply chain, they grabbed product when they found it.

Since most growers do not typically keep large quantities of product over the winter, this might be a new experience for some.

Liquid pesticides contain both inert and active ingredients. The active ingredient is the one that kills the pest, be it a bug, a weed, or some sort of fungus or bacteria. The inert ingredients, which some people refer to as the carrier, does not harm the pest, but are included to make the pesticide work more efficiently. Typically, the freezing point of liquid pesticides is somewhere below 32 degrees F, but the only way to know the freezing point is to read the label that accompanies the product.

Every pesticide reacts differently to a freeze, but in many situations, the act of freezing can separate the active ingredients from the solvents or emulsifiers that make up the insert ingredients. For example, this fall, at the Clean Sweep program for unwanted pesticides, I saw a partial container of glyphosate that had frozen. In the bottom of the container were large, salt-like crystals, what I presume was the active ingredient which had fallen out of solution. The grower had attempted to reconstitute the mix by warming and shaking the container, but to no avail.  Once separated, it is usually very difficult to recombine the ingredients.

It is important to note, some of these products contain oils or flammable ingredients, so do not thaw with flame or heat! Let them warm up at room temperature if needed!

Fred Whitford showed some slides at our August PARP session of a trailer especially modified for storing pesticides over winter.  The trailer was outfitted with insulation board on the walls and ceiling, and a temperature sensitive switch connected to 3 traditional incandescent bulbs, which kept the trailer at a comfortable 40 degrees in the winter. In this case, LED bulbs would not produce enough heat to warm the trailer.

Wettable powders, granular pesticides and other dry formulations generally are not affected by low temperatures in storage.  However, these dry formulations are often prone to drawing moisture, and can cake, become clumpy or the packaging can become weakened.  Water soluble packaging should be protected from freezing because it can become brittle and crack open.

Also note, you should store pesticides in areas away from feeds, and fertilizers, with good ventilation and security to keep children, pets and livestock away.

Be wary of black cutworms after late planting
June 22, 2022