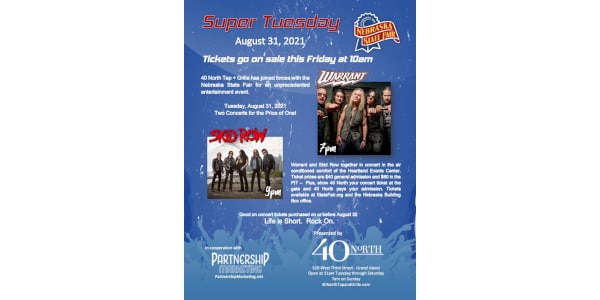 Nebraska State Fair Executive Director Bill Ogg said, “The Nebraska State Fair counts on partnerships in just about everything we do, but this is the first time we’ve undertaken such an agreement in our concert series. I believe this opens the door for even greater opportunities in the future.” Ogg said, “Live concerts are an integral part of what we do at the Nebraska State Fair and complements all the other great offerings from youth livestock to fair food to the carnival midway.”

Jay Vavricek, owner of 40 North Tap + Grille said, “We couldn’t be more pleased to be a part of this tremendous rock concert experience at the Nebraska State Fair, with two concerts for the price of one. It’s a collaboration that’s win/win for the State Fair and 40 North, creating an exciting entertainment opportunity for fairgoers from throughout Nebraska.”

Skid Row hit the American music scene in the mid 80s and is best known for songs like: “I Remember You”, “18 And Life”, “Youth Gone Wild”, among others.

Warrant also performs on the HEC stage bringing their 80s rock and roll performance as they share the stage with Skid Row. Warrants produced hits including: “Down Boys”, “Sometimes She Cries”, “Heaven”, and “Cherry Pie” among others.

Vavricek said, “Both bands have continued touring to sold out audiences around the world bringing their hard rock essentials to Nebraska metal fans. We are happy that all the schedules lined up so we could present yet another attraction at the Nebraska State Fair.

Skid Row and Warrant, two shows for the price of one. Tickets go on sale this Friday.
$40 General Admission lets you sit or stand wherever you want, while $60 gets you into the pit right next to the stage. Tickets are available at StateFair.org and at the State Fair Box office in the Nebraska Building.

Vavricek said, “Not only that, but for those concertgoers that show their concert ticket to our green clad 40 North employees at the fair, we’ll pay their gate fee on August 31st. Vavricek said “This offer is good for tickets purchased on or before August 30th. This reinforces 40 North’s commitment to provide top quality live music at an affordable price. Stay tuned for more great things to come”

Skid Row and Warrant in concert live at the Nebraska State Fair, in cooperation with Partnership Marketing and presented by 40 North Tap + Grille in Grand Island.