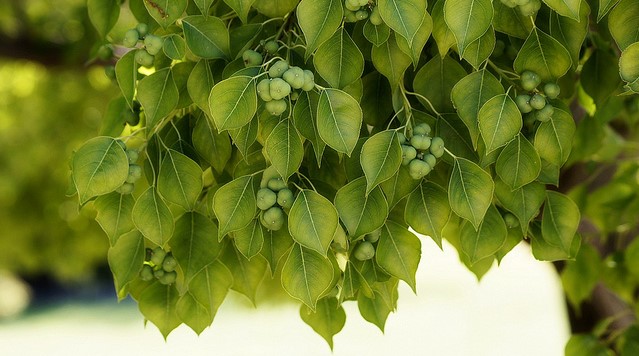 NEW ORLEANS (AP) — The tallow tree, a “super invader” with toxic leaves and no natural enemies in North America, is conquering the South.

Overtaking forests from Texas to Florida, tallows grow three times faster than most native hardwoods, and each one casts off 100,000 seeds a year. Controlled burns haven’t stopped their spread, nor have herbicide sprays from helicopters. Cutting them down works only when each stump is immediately doused with chemicals. Harvesting them for biofuel remains more a promise than a practical solution.

Some scientists say introducing a flea beetle from the tallow’s native habitat in eastern China may be the best alternative.

But he also points to success stories, such as the aquatic weevil that munches on giant salvinia, a floating fern from Brazil that had been clogging waterways in Florida and Texas until its insect enemy was brought in. The weevil underwent a similar line of testing through the U.S. Department of Agriculture, and like the flea beetle, the weevil spends its entire life-cycle on one plant, he said.

“Importing an organism to help control another organism right off the bat doesn’t sound very intuitively smart to do, but it turns out that especially with insects and plants, they’ve co-evolved over many millions of years, and in a lot of cases, the insect is very host-specific,” said Massimi, the invasive species coordinator for the Barataria-Terrebonne National Estuary Program along the Louisiana Gulf Coast.

In this case, the flea beetle (Bikasha collaris) generally ignores other plants as it eats the roots and leaves of the tallow (Triadica sebifera), a host-specific tendency tested on about 150 other plant species in a decade of laboratory work in the U.S. and China, researchers said.

The USDA’s Animal and Plant Health Inspection Service has been working on an environmental impact assessment, which will include a public comment period. If approved, the bugs could be released sometime in 2018. Meanwhile, researchers in Louisiana are studying tallows to gain a better understanding of the beetle’s effectiveness once they are let loose.

Benjamin Franklin sent tallow seeds from London to a friend in Georgia in the 1700s, but genetic testing cleared the founding father of blame for the kind of tallows growing so aggressively today — those trees were apparently introduced by federal biologists around 1905, according to research led by Evan Siemann, an evolutionary biologist at Rice University, that was published in The American Journal of Botany in 2011.

U.S. Forest Service data show tallow now spreading across 10 states. Its growth nearly tripled in Texas in the last two decades, and increased 500 percent in Louisiana, where its higher tolerance for salinity enables it to crowd out moss-covered bald cypress in swamps and bayous. Populations also are up along the Atlantic coast, from Florida to the Carolinas.

“Tallows take advantage of disturbances,” said Nancy Loewenstein, an invasive plant specialist at Auburn University. “Storms, floods, construction sites, logging sites, anything that disrupts the environment will give an invasive like tallow an opportunity to take over.”

The help can’t come too soon for the keepers of America’s suffering forests. Tallows grow into fully mature trees in just three years, far outpacing native maples, oaks, cypress and elms. Their leaves are toxic to some animals, and they cast off litter that changes soil chemistry and disadvantages competitors.

“Chinese tallows are very competitive, and they have no natural predators here like in their native China,” said Karan Rawlins, an invasive species specialist at the University of Georgia’s Center for Invasive Species & Ecosystem Health. “Very few if any insects recognize it as a food source, so it has basically become a super invader.”

Also known as the popcorn tree and candleberry tree, tallows have been planted widely since their first seeds arrived. Coveted as ornamentals for their vibrant fall foliage, they have seeds encased in small green capsules that split when ripe, revealing a small cluster resembling a puffy kernel of popcorn. Their oils have been used in candle and soap-making, and beekeepers like their bountiful nectar.

But ecologists say they do more harm than good, decreasing the diversity of plants, trees and insects, and weakening the food chain for birds and animals. At least one study found that frog eggs are less likely to hatch into tadpoles in water littered with tallow. And since the seeds don’t provide much nutrition, Massimi said they’re like “junk food” for migrating birds.

It’s taken more than a decade to clear tallow from just half the 86-acre Audubon Louisiana Nature Center after floods from Hurricanes Katrina and Rita.

“We still have 40-plus acres that are 95 percent Chinese tallow, so we have a lot of work to do, and it’s going to be a long, long haul,” said Llewellyn Everage, who directs volunteers and interns at the site. “This is not a quick problem to fix.”