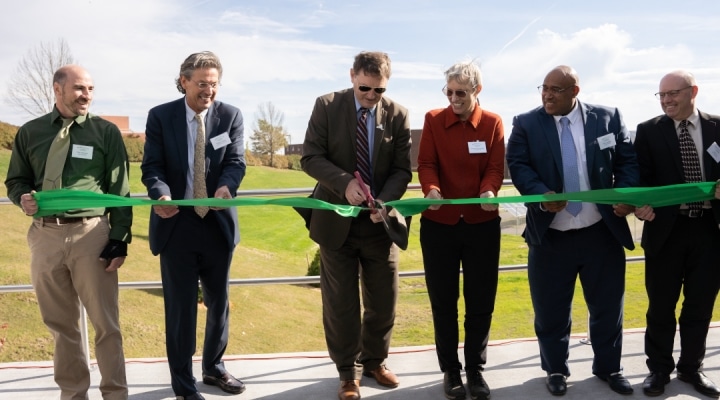 MORRISVILLE, N.Y. — SUNY Morrisville made another move toward clean energy with the grand opening of its new Agricultural and Clean Energy Technology (ACET) Center.

Students, faculty and staff, along with industry partners and VIPs, gathered to celebrate at the new $16 million, 30,000-square-foot applied learning technology building, which houses the college’s renewable energy, agricultural engineering and diesel technology programs. Students started taking classes in the building this semester.

“We are very excited about this new building,” said SUNY Morrisville President David Rogers. “The timing of this building could not be better planned and it opens at a critical time, especially as Central New York and New York State pursue clean energy priorities.

“This investment creates opportunities for graduates to address climate change, while also positioning Morrisville with sustainable pathways in higher education,” he said.

“Food and agriculture. That’s the future,” said Richard Ball, commissioner of agriculture & markets. “This Agricultural and Clean Energy Technology Center is going to focus on those needs, provide the education, provide the training to build that kind of workforce that we need so much to help support New York’s growth in these industries.”

“It is clear that we have an important tie between energy and agriculture, which fits well with both the campus mission and the future priorities of New York State,” said Phil Hofmeyer, associate professor of renewable energy.

The renewable energy, agricultural engineering and diesel technology programs are all built on strong relationships with advisors, industry leaders and partners, and supportive alumni, many of whom attended the ceremony.

Guests were invited to tour the center to see how experiential education gets put to its full potential at SUNY Morrisville.

The center is filled with real-world laboratories, based on industry standards, which are helping to prepare students to succeed in industries reaching out for qualified graduates with keen skillsets.

“Our goal is to use this facility to its maximum potential as we shepherd in the next era of commercial and industrial energy system designers, project developers and operations managers,” Hofmeyer said.

Graduates from the college’s renewable energy, agricultural engineering and diesel technology programs are in high demand, with employers reaching out each semester for qualified applicants.

“We have dozens of companies contacting us looking for skilled and competent workers trained in electrical and all aspects related to renewable energy,” said Ben Ballard, associate professor of renewable energy.

Same is true for agricultural engineering and diesel technology, which are keeping pace with the complex systems and machines students will encounter on the job.

“More impressive than the building and labs contained within it is the learning that’s taking place here,” Rogers said. “Here, we are producing a strong workforce to accommodate the growth of the industry and fill positions with graduates who have the technical and educational background to help our future economy thrive.”

Additional features of the new building:

SUNY Morrisville’s curricula are enriched with applied learning and pave the way for opportunity at both the Morrisville and Norwich campuses. An action-oriented, interactive learning lab, the college is a national leader in technology and has been lauded for its exemplary, innovative and effective community service programs.