Home » Sunflower: The story of this summer goddess begins with search for love
flowers gardening 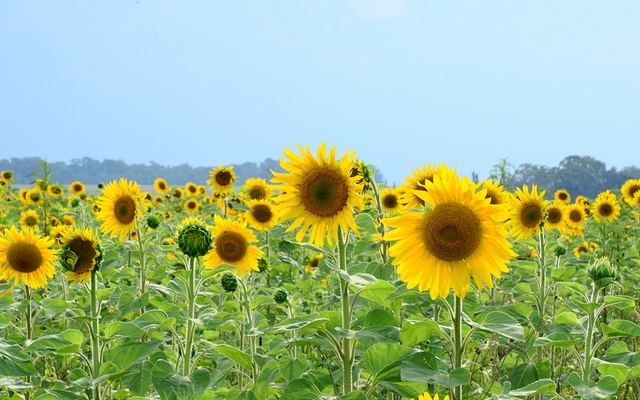 Recently, sunflower has been the subject of breeding efforts aimed at making it a more attractive garden flower and cut flower. This has resulted in the introduction of a number of new varieties which are shorter and more free-flowering. (Marcel Sigg via Flickr/Creative Commons)

COLUMBIA, Mo. – The sunflower’s story begins with a tale of unrequited love.

According to Greek mythology, the water nymph Clytie fell in love with the god of the sun, Apollo, who dazzled the earth as he drove his golden chariot across the sky each day. When he rejected Clytie’s affection, it nearly drove her mad. She spent days without food or water as she searched the heavens and waited for Apollo to appear.

“In the end, she was transformed into a sunflower, a plant which turns its face toward the sun as it moves across the sky each day,” said University of Missouri horticulturist David Trinklein.

Young sunflowers actually search the heavens for light for photosynthesis in a process called heliotropism, Trinklein said. The sunflower’s internal (circadian) clock acts on growth hormones that cause cells on different sides of the plant’s stems to enlarge or contract. Older sunflowers mainly face east, warming themselves early in the day to attract pollinators.

This tough, carefree flower will bring smiles to the faces of even novice gardeners and children, Trinklein said. Its head of tightly packed clusters of small, tubular disc florets produce seeds. The surrounding ray florets, often incorrectly referred to as petals, attract pollinators.

Recently, sunflower has been the subject of breeding efforts aimed at making it a more attractive garden flower and cut flower. This has resulted in the introduction of a number of new varieties which are shorter and more free-flowering.

“A good example is the variety ‘Soraya,’ the first sunflower to win the coveted All-American Selection designation,” Trinklein said. It produces four to six eye-catching blooms per stem on plants that reach a mature height of about 5 feet.

Another recent AAS winner is “Suntastic,” a dwarf sunflower that, unlike other varieties, produces new flowers all summer long, he said.

Trinklein shared several other facts about these beacons of summer:

• Not all sunflowers are created equal. Single-stem sunflowers do best in high-density plantings and produce consistently on tall stems. Plant throughout the season for continuous blooms. Branching varieties produce flowers on multiple shorter stems that bloom all season.

• In 1987, Vincent van Gogh’s “Still Life: Vase With Fifteen Sunflowers” sold to an anonymous buyer for $39.9 million, a record at the time.

• Not all sunflowers are pollinating. Breeders have created pollenless varieties that enjoy a longer blooming season. Check seed packages for classification.

• Sunflowers contain a compound that is toxic to neighboring species.