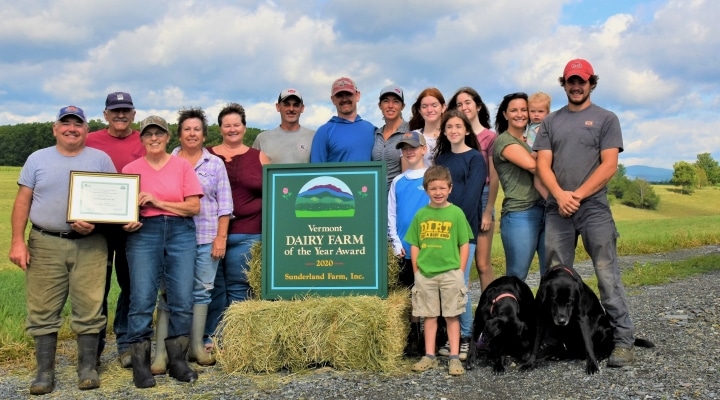 BRIDPORT, Vt. — Sunderland Farm, a sixth-generation dairy operation in Bridport, can best be described as a farm with a future that’s not forgotten its past.

Although it can trace its beginnings back to the mid-19th century when thousands of Merino sheep grazed its pastureland, the farm has never stopped moving forward. The farmers are quick to adopt new technology, including robotic milkers, to make their operation more efficient and cost-effective. Their attention to detail when it comes to their cows is evident by their exceptional milk quality, high quality forages and ongoing measures to improve cow comfort.

So it’s easy to see why this dairy farm was chosen as the Vermont Dairy Farm of the Year for 2020.

The principal owners of the 450-head Holstein operation are brothers Harold and Larry Sunderland and their nephew, Bob Sunderland. Other family members who work on the farm include Larry’s twin sister, Linda Forbes, who does seasonal field work, operating the mower and hauling wagons; Harold’s wife, Margaret, the farm bookkeeper who also helps clean the robotics barn; and Bob’s wife, Nancy, who drives the tractor during harvest season.

The award is presented annually to an exemplary dairy farm by University of Vermont (UVM) Extension and the Vermont Dairy Industry Association (VDIA) in cooperation with the New England Green Pastures Program. A team of past Vermont Dairy Farm of the Year winners serves as judges, visiting the finalists’ farms to observe their operations and select a winner.

They look for excellence in pasture, crops and herd management; quality milk production; good stewardship of the land; and innovative practices. The farmers also need to be good ambassadors for the dairy industry.

According to UVM Extension’s Tony Kitsos, the state coordinator for the awards program, Sunderland Farm demonstrates all this and more.

“The judges were impressed with the family’s strong commitment to dairying, their numerous efforts at improving their farmstead with water quality in mind and their ability to bring in new technology, such as through robotics, with an eye to the future. They don’t grouse about the low milk prices and other downsides of dairy. They just focus on how best to go forward.”

The Sunderlands will be recognized, along with the top dairy farm winners from the other New England states, in a virtual awards program on Sept. 18, hosted by Eastern States Exposition and emceed by Green Pastures Program chair Gary Anderson. They also will be honored at the VDIA banquet at the Vermont Farm Show in January and at a special awards banquet at the next Eastern States Exposition in September 2021.

Other finalists for this year’s award were Riverhill Farm (Cameron Clark), Williston, and Standard Milk at Butterwick Farm (Ramsay and Caroline Mellish), Cornwall.

The farm, which encompasses 835 acres of owned and rented land, was purchased in 1860 by Harold and Larry’s great-great grandfather, Darius Myrick, who raised Merino sheep. He left it to his son, Elwin Z. Myrick, who bought up surrounding parcels of land as they became available to expand his holdings. The switch from sheep to dairy occurred over several years in the late 1800s while Elwin owned the farm.

Earl Sunderland, husband of Olive Myrick, Elwin’s only child, inherited the farm in 1920. It later passed to his son, Lyle Myrick Sunderland, who operated it until 1976 when his sons, Harold and Larry, took over, establishing Rolling Acres Farm as a partnership.

In 2015 they set up a new entity, Sunderland Farm, Inc. The brothers still own the property (dba Rolling Acres Farm) and lease the land, buildings and some of the machinery to Sunderland Farm, owned by Harold and Bob, who is gradually purchasing the cows.

“It is not always easy to transition ownership from one generation to the next,” Kitsos points out. “These farmers were able to work out a plan that let them ease into the transition to bring Bob into the fold, something that the judging team also noted.”

The Sunderlands currently milk 210 cows, shipping their milk to the Dairy Farmers of America Cooperative in St. Albans. Their rolling herd average is 27,000 pounds, well above breed average, with 4 percent butterfat and 3.1 percent protein, all of which can be attributed to excellent herd management practices, attention to detail and selective breeding for year-round calving.

They also credit their decision to build a new state-of-the-art barn with computer-assisted robotic milkers and other automated features as contributing to their high production numbers.

“We saw an increase in production when we moved the cows to the new facility,” Bob says. “In the old barn they were averaging 70-75 pounds of milk a day. It’s around 83 on average now though we’ve seen a high of 93 pounds.”

Kitsos adds, “They looked at several ways to bring robotic milking technology to their operation. After much research and consideration, they agreed that building a new facility instead of retrofitting the old freestall barn, now converted to house young stock, was the best way to add robotics, and they never looked back. It fit best with the way they wanted to manage going forward.”

They consulted with Paul Godin of the Lely Center New England in Enosburg Falls to determine the best set up for robotic milking for their size herd. Per his recommendation, they purchased four Lely Astronaut A4 robotic milking systems for the new barn, which was completed in May 2017.

“Before we switched to robotic milkers, we milked twice a day in a double-eight herringbone parlor. Each milking took four to five hours,” Bob says. “Milking now requires less labor and frees me up to do more crop work and put up better quality feed.”

He also gets to spend more time with his family, including Nancy, a former U.S. Marine truck driver, and their five children–Brittany, 21; Abigail, 16; Vanessa, 14; Laila, 12; and Beau, 8. Both Vanessa and Beau have expressed interest in farming as a career, which may mean a seventh generation on the farm.

“When we got the robotic milkers, it transformed farm life exponentially,” Nancy says. “We have more flexibility. Bob is able to be more involved with the kids and attend their birthday parties, dance competitions and other activities.”

However, the transition was not without its challenges. Bob recalls that the first three days were tough as it took time for the cows to accept the new system.

“We sorted them into two groups, first lactation and the more mature cows, and had two neighbors with cattle trailers and many friends and other farmers come to help,” he says. “That first day we started at 1:30 p.m. and it took eight hours to take them all through.”

“But it was nice to see the ‘fetch cow’ list get shorter and shorter as the cows adjusted to the routine,” Nancy adds.

The dairy farmers also say that the new facility has resulted in improved overall herd health. The 134-ft. by 264-ft. freestall barn was designed for optimal ventilation and cow comfort. Cyclone fans and outside curtains automatically adjust temperature control to ensure that the cows are comfortable year-round.

Feeding is free-choice. The cows are fed a total mixed ration of alfalfa hay, corn silage, cornmeal and minerals. The Sunderlands purchase grain but grow all their own forages.

This year’s drought conditions resulted in a poor first and second cut of hay. “We have some carryover from last year so have not had to buy any forages yet,” Bob says.

The cows get a pelleted grain ration when they enter the automatic milking system to be milked, which could be three or more times a day, depending on the animal. The rest of the time they can move about the large, uncrowded facility freely, giving themselves a back scratch on the cow-activated rotary brush or relaxing under the misters before settling down on bedded mattresses.

In addition to these amenities, the Sunderlands have found a unique way to keep their cows content while also reducing their costs for bedding.

They’ve arranged with their town’s recycling center to take the cardboard and paper that’s collected each week and shred it in a large grinder on the farm. They mix it with chopped hay and sawdust for bedding for the young stock. The cows are bedded with shavings and sawdust.

Herdsman Steve Norris, a 12-year employee, oversees the robotics and cows in the barn. He’s enthusiastic about the technology, which he finds helps him manage the herd more efficiently.

“What’s so great about this system is that the cows milk themselves. They enter when they’re ready.

“This set up makes it way easier to keep track of each cow, its lactations, milk production and even how many times it walks through the robot,” he explains. “The transponder on the cow’s collar sends data to the computer and keeps track of each cow’s activity and heats.

“The somatic cell counter records each cow’s cell count. If it’s too high, the milk is discarded.” The digital data also allows them to make other management decisions, such as which cows to cull.

The Sunderlands consider Steve part of their close-knit family along with Bryan Ashley-Selleck, who runs the equipment and cleans the heifer and dry cow barn. This strong employer-employee relationship is just another reason why the farm has been so successful.

Their commitment to being good stewards of their land and willingness to adopt new conservation practices is another.

Over the years they have relied on George Tucker, a soil conservationist in the Middlebury Natural Resources Conservation Service (NRCS) field office, for technical assistance, including help in developing a viable, long-term conservation plan for the farm.

“With the new barn we needed more manure storage capacity,” Bob says. “We installed a 2.1 million-gallon manure storage facility with a pump and transfer system. NRCS’s Environmental Quality Incentives Program covered 85 percent of the cost.” They also worked with Tucker to develop a wastewater plan for the calf barn.

The farmers plant no-till and low-till corn and seed winter rye as a fall cover crop in their cornfields, practices that not only improve soil health and prevent nutrient run-off into waterways, but help them reduce their fertilizer costs.

“Next year we plan to build a catch basin to collect the leachate from the silage bunkers,” Bob says. This will prevent it from entering the groundwater. The project will be funded through NRCS.

“Sunderland Farm will continue to succeed in the future because they tackle everyday problems with conviction and enthusiasm,” Kitsos concludes. “That positive attitude can make all the difference in the world between success and failure.”

Troxler announces $2 million in funds for dairy assistance due to COVID-19 losses
September 20, 2020