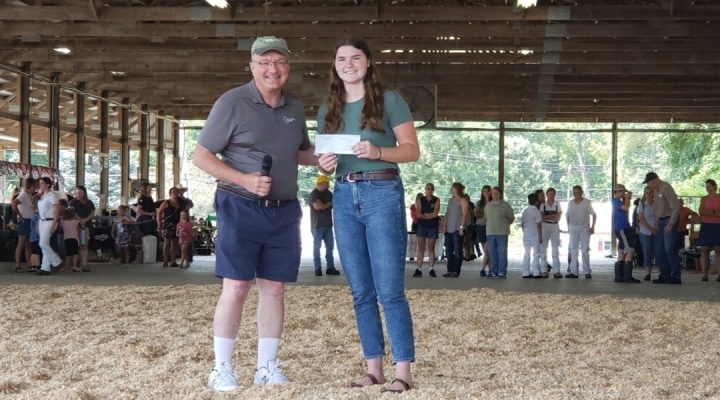 SARATOGA CO., N.Y. — The Saratoga County Agricultural Promotion Committee is pleased to announce the winners of the Sundae on the Farm Agriculture Scholarship.

This award was handed out at the Saratoga County Fair during the conclusion of the 4-H Dairy show. Peter Bardunias, Senior Vice President, Community Advancement for The Capital Region Chamber and member of our Agricultural Promotion committee, presented the awards.

The scholarship is made possible by all who volunteer, support and contribute each year to Saratoga County’s Sundae on the Farm. It is intended to alleviate costs associated with further education endeavors in the agriculture industry. All of the winners are bound for success with their exceptional college transcripts, ambitious goals, and dedication to our local agriculture!

Hannah (Lainey) Koval
Lainey grew up on Koval Brothers Dairy Farm in Saratoga county and whether it was showing her cows at the fair, helping her parents in the barn, promoting local dairy products, or being a part of her local 4-H or FFA program, Lainey was always submerged in agriculture. She attends Cornell University for Agricultural Science with plans to concentrate in business management so she may, hopefully, return and work on her family’s dairy farm.

Michael Theobald
Michael came into the world of agriculture later in life through at a flower nursery in Saratoga Springs. The owners themselves had an overflowing passion for the nursery business which watered his own growing love for Agriculture. The experience helped him settle on pursuing an education in agriculture. He is attending Suny Morrisville with his major in Agricultural Science.

Blake Wadsworth
Agricultural was the base of some of Blake’s earliest memories. His day-to-day has always revolved around agriculture; from feeding calves to watching his dad milk cows before school in the morning. He is attending Cornell University it was always his dream to attend their prestigious school of animal science and Dairy management program. When not in school, he spends much of his time working on local dairy farms doing herd work.

We wish each of these winners the best as they move forward with their education and we look forward to crossing paths with them in the future as professionals in our local community of agricultural.

4-Hers are hopping around happy