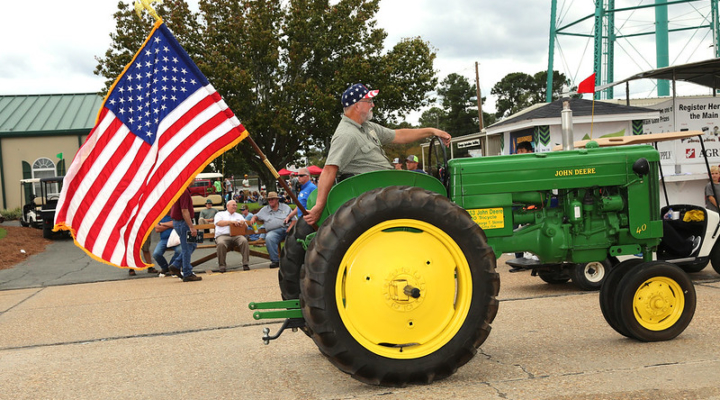 Rainy weather threatened to washout opening day of the 42nd Annual Sunbelt Expo on Oct. 15, but as it turned out, it didn’t rain on the show’s antique tractor parade or the day’s festivities. Attendees had raincoats and umbrellas handy, but they were only needed for a brief period of time early Tuesday. (photo by UGA CAES/Extension, creative commons/flickr.com)

MACON, Ga. — Rainy weather threatened to washout opening day of the 42nd Annual Sunbelt Expo on Oct. 15, but as it turned out, it didn’t rain on the show’s antique tractor parade or the day’s festivities. Attendees had raincoats and umbrellas handy, but they were only needed for a brief period of time early Tuesday.

No one complained about the threat of rain as Georgia farmers need rain to quench drought conditions covering the state. Weather for the last two days of Expo were excellent. The damp conditions probably helped convince farmers to leave their fields to head to Expo and talk to some of the more than 1,200 exhibitors displaying farm equipment and supplies.

Most of the Expo field demonstrations had to be put on hold Tuesday and Wednesday due to wet field conditions but were in full swing by Thursday with the exception of peanuts.

Georgia Agriculture Commissioner Gary Black, members of the Georgia Grown team and Sunbelt Expo staff cut the ribbon for the Georgia Grown Marketplace housed in Expo’s Family Living Center. More than 30 exhibitors who market their Georgia-made products under the Georgia Department of Agriculture’s Georgia Grown brand, had booths selling everything from jellies to bedsheets made with Georgia cotton.

“What you are celebrating here today is that a lot of people had a dream. They’ve been making products that people have been telling them they ought to sell, and they followed that dream,” said Commissioner Black. “The Georgia Grown brand is about people being willing to dream and the partnerships between the UGA College of Agriculture and Environmental Sciences’s Flavor of Georgia Contest and our department to highlight and market these businesses.”

Marty Kemp has made promoting the Georgia Grown program and Georgia ag products her primary platform as Georgia’s first lady.

Expo also gained a new partner for its Sustainable Living Center, which highlights proper management of small farms and backyard gardens. Flint River Fresh, which is supported by the Flint River Soil & Water Conservation District (FRSWCD), used the center to highlight the work it’s doing to teach residents of urban areas who live in food deserts how to grow their own food.

Representatives of Expo, Flint River Fresh, the Georgia Natural Resources Conservation Service and FRSWCD participated in a ribbon-cutting ceremony to mark the new partnership. Flint River Fresh Executive Director Fredando Jackson, known as “Farmer Fredo,” and other program representatives were on hand throughout Expo to discuss the non-profit organization’s mission to teach residents how to grow food. Over the three-day event, gardening experts delivered seminars on various types of irrigation systems for gardens, using two-wheel, walk behind tractors in small plots and soil testing.

North Carolina displayed the best of its farms from the Mountains to the Sea and the diversity of its agriculture as the 2019 Expo Spotlight State. North Carolina Farm Bureau President Larry Wooten welcomed Expo attendees to the ribbon cutting for the state exhibit saying agriculture is North Carolina’s top industry and contributes $98.1 billion to the state’s economy.

Gov. Brian Kemp spoke at the Sunbelt Expo Farmer of the Year lunch saying,
“Agriculture is the fabric of our state. It’s what keeps our economy diverse and makes our state a great state to raise our families.”

In reference to all of the farmers at the lunch and show, Kemp said, “You are the heart and soul of our state and the Southeast United States. You are why we’re able to feed and clothe the world.”

For the first time in Expo history, all of the contestants in the show’s annual Milking Contest were women. Staff from the ag schools at Abraham Baldwin Agricultural College (ABAC) and the  Universities of Auburn, Florida and Georgia competed against each other for bragging rights.