Maine is positioned much better this summer in terms of water resources. (Mark Jones, Flickr/Creative Commons)

AUGUSTA — Department of Agriculture, Conservation and Forestry (DACF) officials have provided a summer 2017 Maine water resources overview. Compared to the summer of 2016, Maine is positioned much better this summer in terms of water resources.

Normal winter conditions in the early part of 2016, plus normal precipitation in the spring, contributed to near normal runoff and recharge to groundwater. As of July 18, in all of New England, only a small area of southern coastal Maine was experiencing abnormally dry conditions according to the U.S. Drought Monitor.

For comparison, in July of 2016 most of New England was under abnormally dry to moderate drought conditions and some areas of Massachusetts were in severe drought. 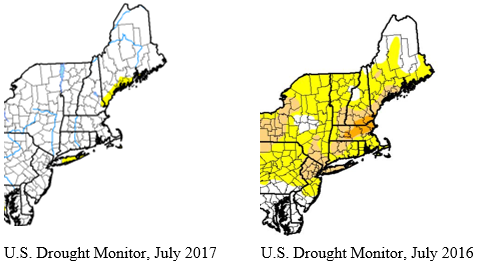 In Maine last year, the southern coastal part of the state was hit particularly hard with moderate to severe drought through the summer months.

Groundwater experienced excellent recharge during Spring 2017 with most observation wells in the U.S. Geological Survey’s monitoring network reaching slightly above normal levels. Current conditions are near normal across the state, with only a few wells in southwestern Maine experiencing slightly below normal conditions. “This shows great improvement over 2016 when most wells in the southern half of the state were far below normal,” said State Geologist Robert Marvinney.  “It’s good news for public water systems, irrigators, and other users of Maine’s groundwater.”

Tom Gordon, of the DACF’s Soil and Water Program, stressed that, while this is good news for farmers, the time to prepare for the next drought is now. “While drought conditions have abated, land owners need to plan and prepare their water infrastructure for the next drought,” said Gordon. “Information on agricultural water management can be found on the Department’s website at: http://www.maine.gov/dacf/ard/water_management/index.shtml.”