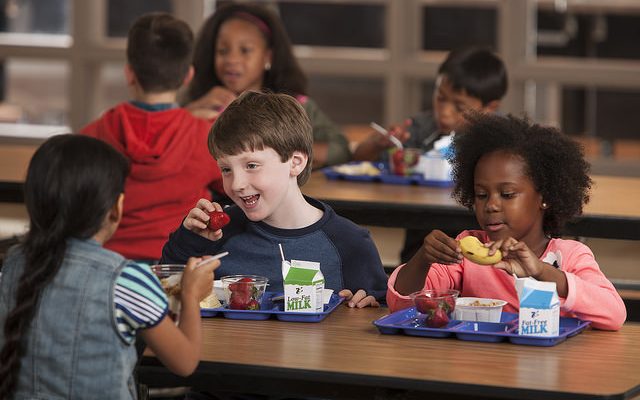 Kentucky has made progress toward closing the summer meal gap, according to Hunger Doesn't Take a Vacation, a new report from the Food Research & Action Center (FRAC, a national anti-hunger advocacy group). (USDA via Flickr)

BEREA, Ky. — Kentucky has made progress toward closing the summer meal gap, according to Hunger Doesn’t Take a Vacation, a new report from the Food Research & Action Center (FRAC, a national anti-hunger advocacy group). The report ranks all 50 states and the District of Columbia on participation in the Summer Nutrition Programs. Kentucky had the 3rd largest increase in children served summer meals and moved in the national rankings on the indicator from 49th lowest to 47th.

When school lets out, millions of low-income children lose access to the school meals and healthy afterschool snacks they receive during the regular school year. The Summer Nutrition Programs help fill this gap by providing free meals and snacks that meet federal nutrition standards to children who might otherwise go hungry. The report measures participation in the Summer Nutrition Programs, which include the Summer Food Service Program and the National School Lunch Program, at the national and state levels.

“We still have a way to go in closing the summer hunger gap in Kentucky, but it’s very positive news that summer meals are reaching more children,” said Reid Livingston, Coordinator of the No Kid Hungry Kentucky campaign – a state wide collaborative lead by the Kentucky Association of Food Banks.  “Kentucky can build on this progress by redoubling outreach efforts throughout this summer to make sure children and families are aware of this valuable program.  The Summer Nutrition Programs can make a huge difference for the more than 200,000 food insecure children in Kentucky.”

If Kentucky reached the ambitious but achievable goal of 40 children receiving summer meals in July 2016 for every 100 receiving free or reduced-price lunch during the 2015–2016 school year, an additional 118,000 children would have been fed each day. Kentucky would also have collected another $9,313,188 in child nutrition funding in July alone, assuming the programs operated 20 days.

Summer meals are provided at local sites in Kentucky such as schools, recreation centers, libraries, churches, parks and non-profit organizations for children ages 18 and under. Not only do children stave off hunger as a result of free summer meals, they also benefit from the enrichment activities offered at the vast majority of sites — activities that keep them learning, engaged, and better prepared to return to the classroom in the fall.