Home / National / Summer heat arrives while unsettled pattern plagues corn belt
A new user experience is coming! We'll be asking you to login to your Morning Ag Clips account March 1st to access these new features.
We can't wait to share them with you! Read more here. 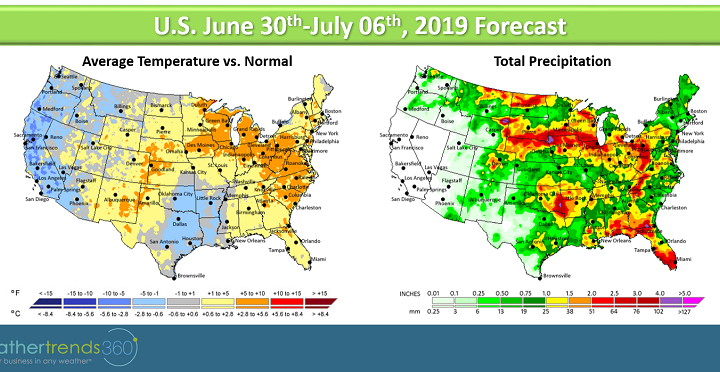 Looking ahead, a more summer-like temperature pattern is settling in across the eastern half of the nation.

WASHINGTON — Spring 2019 brought abysmal weather to the Corn Belt with flooding and cool weather. Astronomical Spring (which began on March 20th and ended on June 21st) was the coolest in 6 years and the 1st wettest in 28+ years for the Corn Belt as a whole. The seemingly relentless rainy pattern has taken a big toll on corn planting this season. By this time of year, almost all of the major corn-producing states should be done with corn planting, however, there are several states that have not finished as the window to plant is very nearly closed. Only 7 out of 18 of the main-producing states have finished planting as of June 23rd. Completed states include: Iowa, Kentucky, Minnesota, Nebraska, North Carolina, Tennessee, and Texas. Ohio is the farthest behind with only 80% completed as of June 23rd, although some progress was made from the week prior.

The week-ending June 22nd, 2019 was the 6th coolest and 4th wettest third week of June in 28+ years for the Corn Belt. The rain was heaviest from eastern Kansas to the Ohio Valley with some severe storms across the region, especially towards the latter half of the week. Wet weather will have been a headwind for planting, but despite the unfavorable weather Ohio, Kansas, Missouri, Illinois, and Indiana were able to make some planting progress on the week prior.

Looking ahead, a more summer-like temperature pattern is settling in across the eastern half of the nation. Not as wet this week (ending June 29th) as precipitation will trend closer to normal for the Corn Belt. Despite the more normal precipitation trends, there are pockets of the region where heavy storms have caused flash flooding, including in parts of southeastern Missouri and near Sioux Falls, SD. The biggest threat for severe storms over the next several days will be in the northern Plains and Upper Midwest.

The summer-time heat continues into next week with temperatures trending near the 4th warmest in 28+ years for the first week of July for the Corn Belt. Unfortunately, the unsettled weather pattern looks to return and this could be one of the wettest starts to July in 28 years for the Corn Belt. Shower and thunderstorms look to be an almost daily occurrence next week, including into the Independence Day weekend. We’ll have to watch for tropical moisture from the Gulf of Mexico enhancing rainfall across the western Gulf Coast which could increase flooding concerns there.

Beyond July 4th, it looks as though we’ll see a return to a cooler than normal pattern and a continuing unsettled weather pattern as we head deeper into July.

Farm to School Act of 2019 introduced