Home / New York / Sugarmakers to host Tree Tapping Ceremony
A new user experience is coming! We'll be asking you to login to your Morning Ag Clips account March 1st to access these new features.
We can't wait to share them with you! Read more here. 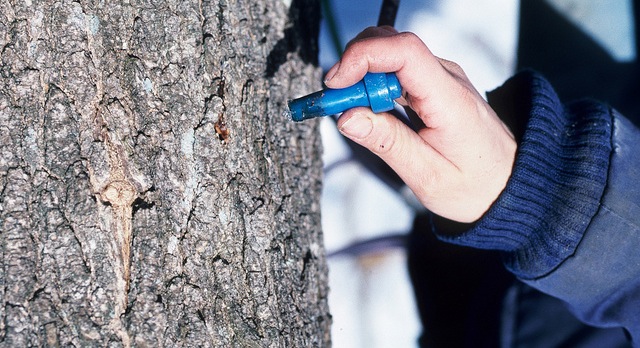 New York ranks as one of the top maple producing states in the U.S. (Wisconsin Department of Natural Resources, Flickr/Creative Commons)

GREENWICH, N.Y. — The Upper Hudson Maple Producers Association is proud to take part in New York State’s 23rd annual Maple Open House Weekends. A tree tapping ceremony to kick-off the event in the region will be held on Friday, March 9th, at 12 noon at Maple Acres in Granville, NY. Local, county, and state government agency staff and elected officials will be on hand for the tapping, including a representative from the NYS Dept. of Agriculture and Markets Commissioner’s office.

Maple Acres is celebrating ten years of maple production this year, and is also in the process of becoming New York Grown and Certified, a new program created by the state to recognize producers that create maple products from trees grown in New York and that follow sustainable forestry practices and state food safety standards.

“We hope that the program will be a boost for the whole industry,” said Elizabeth Truso, co-owner of  Maple Acres along with her husband Christopher. “It’s amazing how many people in New York don’t know about all of the uses there are for maple products. My son Daniel is a fifth generation sugar-maker.  I love the idea that this is a tradition that is being carried on, and that we can let more people know about it.”

The Maple Open House Weekends take place March 17th-18th and March 24th-25th, from 10am-4pm daily. The public is invited to take a free tour of 25 different Upper Hudson region sugarhouses and see how maple syrup is produced. New to Maple Weekend this year is River Run Maple in Granville. The Pauquette family, owners of River Run, are looking forward to sharing their experiences with their growing maple business with visitors to their sugarhouse this season.

“We’re inviting area families to come and experience first-hand the sights, smells, and sounds of maple sugar-making,” said David Campbell, a Salem, NY producer and president of the Upper Hudson Maple Producers Association. “Most sugarhouses offer samples and demonstrations, and many of the locations serve a pancake breakfast, as well, for a nominal fee,” Campbell said.

Participating sugarhouses for the 2018 Maple Open House Weekends are:

New York ranks as one of the top maple producing states in the U.S. As spring temperatures begin to rise in late February and early March, maple trees and sugar bushes come alive with activity. In Eastern New York, when the sap begins to drip through sugaring lines, it’s a sure sign that maple season has begun and spring is on its way. The Upper Hudson region is among the largest syrup producing areas in New York State.

The Upper Hudson Maple Producers Association is a trade organization representing over 50 different maple producers, including sugaring operations ranging from less than 200 taps to over 20,000. They work together to raise consumer awareness of pure maple syrup made in the Upper Hudson Region.