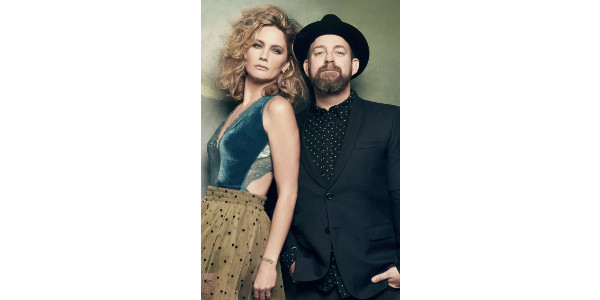 Tickets will be available through Etix at etix.com or by calling (800) 514-3849. In addition, tickets may be purchased at the State Fairgrounds Ticket Office during a limited-time opening from 10 a.m. to noon on Friday, Jan. 19. (Courtesy of Minnesota State Fair)

ST. PAUL — Sugarland is confirmed for the 2018 Grandstand Concert Series sponsored by Sleep Number. Show details are as follows:

Tickets will be available through Etix at etix.com or by calling (800) 514-3849. In addition, tickets may be purchased at the State Fairgrounds Ticket Office during a limited-time opening from 10 a.m. to noon on Friday, Jan. 19. For additional State Fair ticket information, call (651) 288-4427.

About Sugarland: Sugarland, consisting of Jennifer Nettles and Kristian Bush, has been a leading country music duo for the better part of two decades. The duo’s single “Baby Girl” came off its debut album Twice the Speed of Life, and its first two No. 1 singles “Want To” and “Settlin’” were featured on the group’s second album, Enjoy the Ride. The duo won its first Grammy for “Stay” in 2008. Sugarland released Love on the Inside in 2008, and that album produced three No. 1 singles, including “All I Want to Do,” “Already Gone” and “It Happens.” To date, the duo has sold nearly 10 million albums domestically and amassed more than 260 million on-demand streams. With nearly 70 major music award nominations and countless hit songs, the group is back with new music in 2018, including its most recent single “Still the Same.”

About Frankie Ballard: Michigan-born Frankie Ballard is a country music singer-songwriter and guitarist. With three studio albums and eight singles under his belt, Ballard is steadily climbing the country charts. After signing to Reprise Records Nashville in 2010, he released his self-titled debut album in 2011. That same year, he made his Grand Ole Opry debut and released the single “A Buncha Girls.” His second album, 2014’s Sunshine & Whiskey, featured his first and second No. 1 singles, “Helluva Life” and “Sunshine & Whiskey,” respectively. His most recent album El Rio reached No. 9 on the U.S. Country charts.

About Lindsay Ell: Country music singer and songwriter Lindsay Ell grew up in Calgary, Alberta, and discovered her fascination with the guitar at age 8. As a teenager, she released her first album Consider This – an album for which she co-wrote most of the songs. At the age of 21, she moved to Nashville and signed with Stoney Creek Records. “Trippin’ On Us,” her first single, debuted as the most added song on country music radio in the United States and Canada. Her bluesy, pop-country album The Project, produced by Sugarland’s Kristian Bush, was released in 2017 and features the singles “Waiting on You” and “Criminal.”

The following 2018 Grandstand show has already been announced: Niall Horan with special guest Maren Morris (Thursday, Aug. 23). Additional Grandstand artists will be announced periodically throughout the next several months. State Fair fans and music enthusiasts are encouraged to sign up for the State Fair’s e-news at mnstatefair.org to receive concert announcements before tickets go on sale.

Get to know your Checkoff leader: Bill Zurn