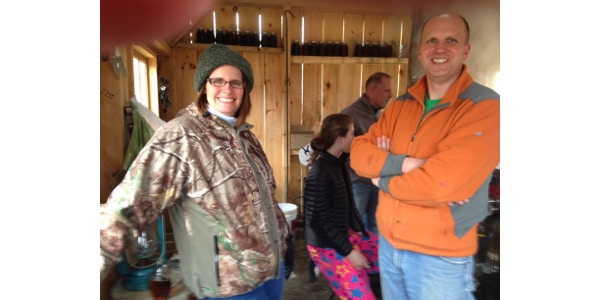 For those of you who have been acquainted with me for years, you know that I am closely tied into the Maple Industry. The Morning Ag Clips has worked alongside the Maple News for years, helping with advertising and social media promotion.

Through the years, we have picked up other maple clients along the way, which has been nice because sugaring season is a time of year that I enjoy immensely. Getting outside and back into the woods; the smell of dirt, the trickling sound of melting snow, the warm sunshine. It brings me back to my childhood and gets me back in touch with the earth.

Maple season 2020 has been drastically neglected this year due to everything that has been going on with Covid-19. Maple weekends have been cancelled, sugarhouse retail stores and pancake breakfasts have been shut down.  It’s been so very hard for our sugarmakers.

This week I wanted to give a highlight to this area of agriculture. These farmers, through it all, are harvesting, and they deserve to be recognized.

So I went back into the archives and grabbed a piece that I wrote many years ago about Sugar-Women. It’s not in its entirety; I clipped the beginning, which is not relevant anymore. But I thought it was a nice reminder of all that goes into maple sugaring and the important people behind it.

Enjoy, and then go make some pancakes with REAL Maple Syrup. 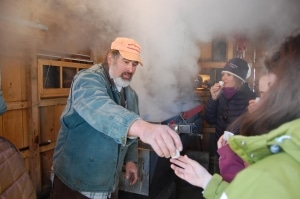 “One of the things I ask myself over and over, every time I flip through the latest issue of the Maple News, is are we reaching the women in the industry?  Do women read this, or is it only men?

My publisher and I go round and round about it.  We want to make sure that we are meeting all of the needs in the industry, including every kind of sugarmaker.  Big, small, east and west. Male and female.

Where are the female sugarmaker’s anyway?

Our stories seem to be written mostly about men, the pictures are primarily of men, and even the majority of the advertisers that I have always dealt with are men too.

Are there any women in the industry? (yes, I know you are there)

This season (2013), I decided to figure it out.  And the answer was yes, yes there are, many women in fact, involved in sugaring.  Here’s where I saw them:

To take you back a step, in 2013 the publisher of the Maple News “built” a sugarhouse.  I was very involved with it. Not so much with the swinging of the hammer, but more along the lines of being the support system.

I brought lunch. I brought in firewood.  I watched the temperature on the thermometer rise.  I reminded the “stoker” that it was time to fuel the fire — I even stoked when he had to go check on some lines.  I applied defoamer, swept the floor, and went for coffee. I entertained children with a bonfire, I bottled, and I picked up scraps of wood left behind from the construction.  I tended things in the middle of the night so that the partners could get some shut eye — and I didn’t even burn the pan. Wow!

I really was a jack of all trades … Hmm … was that what the women in the industry did?  Are they behind the scenes, always picking up the slack where needed?  Are they getting the little things tended to that add up to very big things once you take a good hard look?

I think that I was onto something.

Once the sap started flowing, my weekends were spent traveling from sugarhouse to sugarhouse, taking pictures, getting content for the paper, listening, hearing, smelling, and yes, searching … searching for my “Sugar-Women.”

It didn’t take me long before I found you, many of you.  Doing the same things I had been doing: supporting. Except you were doing even more.

You were the friendly smile that was welcoming folks into your sugarhouse, providing them with their first taste of warm, sweet syrup.

You were the teacher, educating them about the process of collecting sap, boiling it into syrup and then the science of grading it.

You were the warm feeling they felt in your small gift shops, decorated meticulously,  helping to lure visitors to buy more of your syrup and candy.

You were the masters of making candy.  Spending free time pouring sugar into molds, and packaging it up.  You even whipped up maple cream, and applied it to freshly made donuts.

I saw you act as the go-between among family and friends, who worked in the maple venture together.  You smoothed things over, reasoned, calmed, and even at times, ruffled some feathers that needed to be ruffled.

But the biggest thing that I learned this past season, as I traveled to many sugarhouses, is that this industry, the Maple Industry, is your industry.

It takes both, women and men, to get it done.  Your dedication to the partnership, creativity, and commitment of getting the work sorted out, is integral to the viability of your maple business.

Many of you may not have been the partner who initially embraced the idea of “making sugar,” but most of you certainly do support it, and play a major role in getting it made and sold every year.

Here’s to you, my friends, my “Sugar-Women” … celebrate your involvement in this great part of agriculture.  You are greatly appreciated … in all of the roles you play during sugaring.”

**Since 2013, when this article was written, more and more women have been emerging as owners of their own sugaring businesses and leading the way.  I am proud of all of their involvement.  Women have played a huge role through the years in developing the maple sugar industry. It certainly does take all of us, no matter which capacity we choose to operate in.