Home » Sugarbeets as a livestock feed for weaned calves 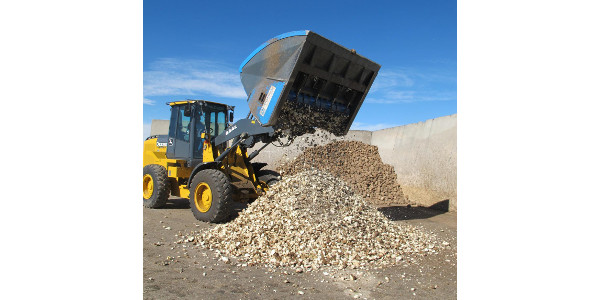 Figure 1. Using a special bucket manufactured by Putsch, research technician Josh Buttle chops whole sugar beets (from the pile in the background) into pieces (foreground) that will be mixed with wheat straw and fed to calves. (Photos by David Ostdiek)

LINCOLN — Can sugarbeets not destined for processing for human consumption be a viable energy source for cattle? That’s what researchers at the University of Nebraska Panhandle Research and Extension Center are studying in cattle on growing and finishing diets.

Karla Jenkins, Nebraska Extension cow-calf and range management specialist at the  Panhandle REC, is studying whether sugarbeets may be an economical alternative energy source for livestock, replacing commodity crops that require expensive inputs.

This is the third year of a trial in which sugarbeets are being combined with wheat straw and fed to cattle. In 2015 and 2016, the trials involved pregnant cows.

In coming months, a group of weaned calves will be compared. First, a growing trial will be conducted, with weaned calves receiving diets with or without sugarbeets (44% dry matter) as an energy source. Those calves will then be used on a finishing trial, with the amount of sugarbeets on a dry-matter basis at either 0%, 15%, or 30%.

Daily gain, feed efficiency, dry matter intake, and carcass characteristics will be measured and evaluated. The objective is to determine how the calves’ performance is affected by including sugarbeets as an energy source in the diet.

Feeding livestock beets that cannot be used for human consumption may offer another market for sugarbeet producers and give cattle feeders an alternative to corn, Jenkins said. To adopt the new feed, feedyards need to be able to project weight gain of cattle fed beets and how long it will take to achieve that weight gain.

The sugarbeets are not fed whole and can be chopped using a special bucket mounted on a payloader.

A demonstration at the UNL Panhandle Research Feedlot in late October showed a loader bucket attachment designed and built by Putsch, mounted on a loader provided by Murphy Tractor & Equipment Co. of Gering. The demonstration was sponsored by BetaSeed.

The current study requires 300 tons of beets, which were donated by BetaSeed, Nick Lapaseotes, and Western Sugar or purchased from the Adams Brothers.

At the demonstration, feedlot staff demonstrated how they chop sugarbeets and mix the pieces with wheat straw. The mixture is stored in large agricultural bags while it is used in the growing and finishing trials. The bags hold 140 to 150 tons each.

Earlier research using sugarbeets to replace corn in limit-fed confinement cow diets was promising, according to Jenkins. That study indicated that gestating cows could be maintained on diets containing sugar beets as well as corn.

Problems with feeding sugarbeets, such as choking, mineral toxicity, and issues with palatability, were not an issue during the earlier research.

Some sectors of animal agriculture are using beets in the diet. Dairy industries in the southern and western US have found sugarbeets to be a profitable energy source to produce, Jenkins said. In addition, research in the dairy industry has reported increased milk production from feeding sugarbeets.

Jenkins pointed out that dairies just across the border from the Nebraska Panhandle, in Colorado, might be a market for western Nebraska sugarbeets not wanted or needed for human consumption.

In Jenkins’ earlier research feeding sugarbeets to pregnant cows, the cows performed similarly on diets of 20% corn and 20% chopped sugarbeets.

With the calves, Jenkins said she expects to see energy results similar to those they saw with corn, but she’s not sure how sugar will compare to corn in its effects on beef marbling and carcass.