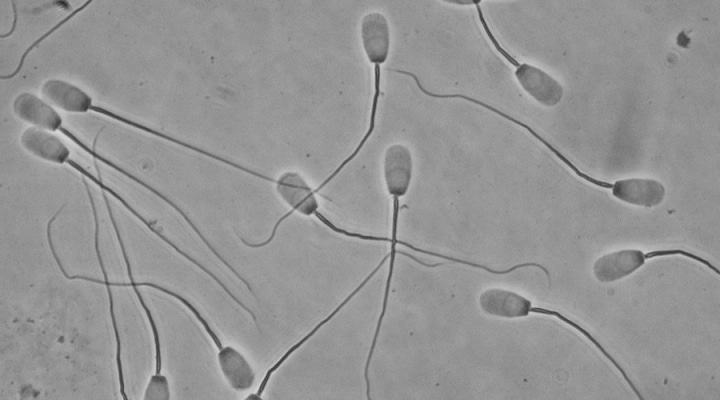 A new University of Illinois study identifies a naturally occurring sugar that slows the maturation of sperm in pigs, opening up the possibility of extending sperm storage time within the female reproductive tract and increasing the chances of successful fertilization through AI. (University of Wisconsin Madison)

URBANA, Ill. — For many livestock species, artificial insemination (AI) is standard. But it can be tricky to achieve success the first time, thanks to variability in ovulation timing across the herd.

Sperm remains viable for a day or two once they reach the oviduct, the tube connecting the uterus with the ovaries, in pigs and cattle. The amount of time sperm can be stored in the oviduct has a direct bearing on AI success; if ovulation happens just outside that window, the effort and expense of AI has to be repeated.

A new University of Illinois study identifies a naturally occurring sugar that slows the maturation of sperm in pigs, opening up the possibility of extending sperm storage time within the female reproductive tract and increasing the chances of successful fertilization through AI.

“We knew there was something about the oviduct that was increasing sperm lifespan, but we didn’t know what it was, exactly,” says David Miller, professor in the Department of Animal Sciences at Illinois and co-author on the PLOS One study. “In this study, we discovered the molecules of the oviduct that bind sperm and increase their lifespan are complex sugars called glycans.”

After screening more than 400 sugars for their capacity to hold sperm, Miller’s team had an inkling glycans were a candidate for pigs. To confirm, they isolated various sugars from the pig oviduct and applied them to beads in the laboratory, mimicking the oviduct lining. Compared with other sugars, the glycan-treated beads bound more sperm.

But it wasn’t just the physical act of slowing sperm down that increased their lifespan.

“We found out glycans were delaying the normal influx of calcium into sperm,” Miller says. “Normally, calcium slowly comes into sperm as they mature, and that triggers them on their differentiation pathway, which makes them capable of fertilization. But binding to these immobilized sugars actually stops that calcium movement inside the cells. So it in a sense, the glycans are blocking their differentiation pathway and making them live longer.”

Miller sees several potential applications for this discovery. For example, it might be possible to conduct a fertility test for sperm using glycans in the lab. Sperm whose lifespan didn’t increase when exposed to glycans would likely be less fertile and could be discarded. It might also be possible, someday, to introduce supplemental glycans in the oviduct during AI to create a larger reservoir of viable sperm.

The results also extend scientists’ understanding of fertility across animal species. Miller has done research to show a similar sugar binds and extends longevity in bovine sperm, and he’s currently looking for genetic similarities in sperm storage organs among a wide variety of animal groups. Nature may use the same mechanisms to lengthen sperm lifespan after mating in several species.