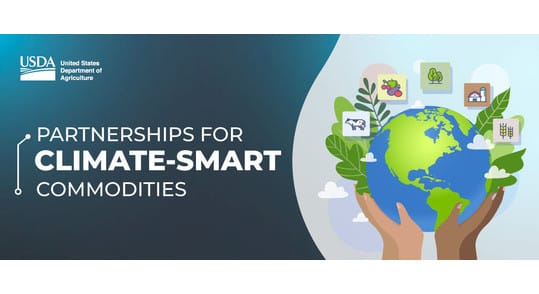 WASHINGTON — The U.S. Department of Agriculture (USDA) announced July 28 that it received a total of $2 billion in submissions for the second funding pool for the Partnerships for Climate-Smart Commodities, with offers to match $1.3 billion in non-federal dollars. This builds on the more than $18 billion in submissions USDA received for the first funding pool, which closed in May. The second funding pool was for applications from $250,000 to $4,999,999 and emphasizes the enrollment of small and underserved producers, or monitoring, reporting and verification activities developed at minority-serving institutions.

“The support and interest that USDA has received through this new opportunity further signifies the broad interest that agricultural and environmental groups have in working together to build climate-smart markets. Between both funding pools, the overall interest reaches $20 billion” said Under Secretary for Farm Production and Conservation Robert Bonnie. “U.S. agriculture has a key role in helping the world in addressing climate change. These $2 billion in applications from over 400 entities in the second funding pool exemplify the strong commitment our farmers, ranchers and forest landowners have in being good land stewards with innovation in a diverse, forward-thinking way. We’re excited about the doors these proposals will open for all American producers and forest owners, especially those that are small or historically underserved.”

The second funding pool closed on June 10. The applicants are wide-ranging, including minority serving institutions, tribal and underserved groups, state and local governments, private companies, and many other entities from across the United States, Tribal lands, the District of Columbia, Puerto Rico, Guam and other territories.

The first funding pool included over 450 proposals ranging from $5 million to $100 million each. The applications came from over 350 entities and covered every state in the nation, as well as tribal lands, the District of Columbia and Puerto Rico. First-round proposals requested more than $18 billion and offered to match with more than $8 billion in nonfederal dollars.

USDA is in the process of evaluating the applications for completeness and will rank them based on the technical criteria provided in the funding opportunity. Selections for both rounds of funding are expected to be announced later this summer.

Under the Biden-Harris administration, USDA is engaged in a whole-of-government effort to combat the climate crisis and conserve and protect our Nation’s lands, biodiversity and natural resources including our soil, air and water. Through conservation practices and partnerships, USDA aims to enhance economic growth and create new streams of income for farmers, ranchers, producers, and private foresters. Successfully meeting these challenges will require USDA and our agencies to pursue a coordinated approach alongside USDA stakeholders, including State, local and Tribal governments.

USDA touches the lives of all Americans each day in so many positive ways. In the Biden-Harris administration, USDA is transforming America’s food system with a greater focus on more resilient local and regional food production, fairer markets for all producers, ensuring access to safe, healthy and nutritious food in all communities, building new markets and streams of income for farmers and producers using climate smart food and forestry practices, making historic investments in infrastructure and clean energy capabilities in rural America, and committing to equity across the Department by removing systemic barriers and building a workforce more representative of America. To learn more, visit www.usda.gov.