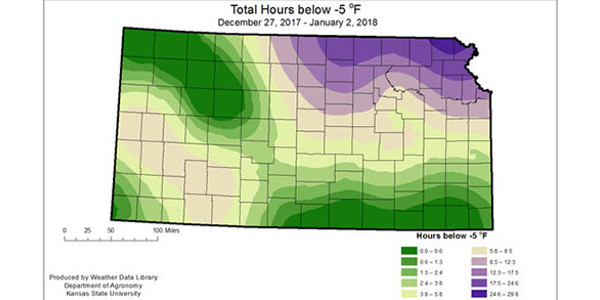 Temperatures that plummeted below zero degrees may have damaged the Kansas winter wheat crop. (Courtesy of K-State Research and Extension)

MANHATTAN, Kan. — The recent, stubborn cold spell that settled over the heartland on New Year’s Day made doing almost anything outdoors difficult, and likely did at least some damage to winter wheat in Kansas, a Kansas State University agronomist said.

Dry conditions in some areas made the crop even more vulnerable to freeze damage.

“Air temperatures on New Year’s Day alone were cold enough to harm the wheat crop in many parts of the state,” said Romulo Lollato, wheat and forages specialist with K-State Research and Extension. North central Kansas had temperatures of 10 below zero F for up to 10 hours and readings in some areas fell as low as 16 below zero.

Kansas typically grows about one-fifth of all wheat grown in the United States. About half of it is exported.

Cold damage to the wheat crop depends on many factors, including how low temperatures go and how long they stay at those levels; the stage of crop development; soil moisture; snow cover (which can provide an insulating effect); and wind speed.

“The effects of the low temperatures could be magnified by dry soil conditions and poor fall development due to late sowing across the state,” Lollato said.

Though the situation may spell bad news for the 2018 wheat crop, it’s too soon to tell the extent of the damage, the wheat specialist said, encouraging growers not to take immediate action.

“While foliage damage will be apparent a few days after the cold event, the first apparent sign of freeze injury being leaf dieback and senescence, symptoms of winterkill will only be apparent at spring greenup,” Lollato said. It’s even possible that if the crown is not damaged, wheat can recover in the spring with little yield loss.

If damage to the crown occurred, the crop will not green up in the spring or will green up for a short period of time using existing resources, and perish shortly after.

“In any case, we will only be able to assess the true extent of the damage at spring greenup,” he said.

“Wheat that has fewer than one to two tillers and three to five leaves will be more susceptible to winterkill, which unfortunately is the situation for the majority of the Kansas wheat crop during the 2017-18 season,” Lollato said, adding that wheat sowing was delayed last fall for about 60 to 80 percent of the Kansas crop due to early October precipitation. That put the crop behind in its development compared with average years, plus many fields in north central Kansas had sowing delayed further because producers were finishing their summer crop harvest.

One encouraging factor, he said, is that soil temperatures never reached single digits at a 2-inch depth across the entire state, and snow cover amounting to as many as 5 inches in some areas could have helped winter wheat survival if the soil surface was covered at the time cold temperatures occurred.

More details, including weather maps are available in the K-State agronomy eUpdate newsletter at http://ksu.ag/2F3yc7y. 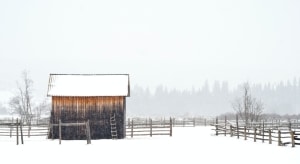 OLYMPIA, Wash. — USDA NASS released its crop progress and condition report for the Northwest Region for the week ending April 17, 2022. Idaho Spring Fieldwork Limited by Cold Weather and Snow There were 1.9 days suitable for fieldwork, down from 5.9 days reported the previous week. Colder than normal temperatures and snow limited fieldwork […] 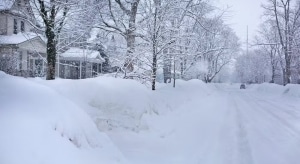 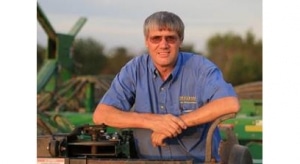 LANSING, Mich.  — The Michigan Wheat Program’s Wheat-tastic Wheat Wisdom Webinar series steps into week #2 on February 24 with popular speaker Phil Needham of Needham Ag Technologies in Calhoun, Kentucky. The weekly programs occur via Zoom and Facebook, beginning at 8 a.m. on Wednesdays and running about 90 minutes. The next two programs in […]