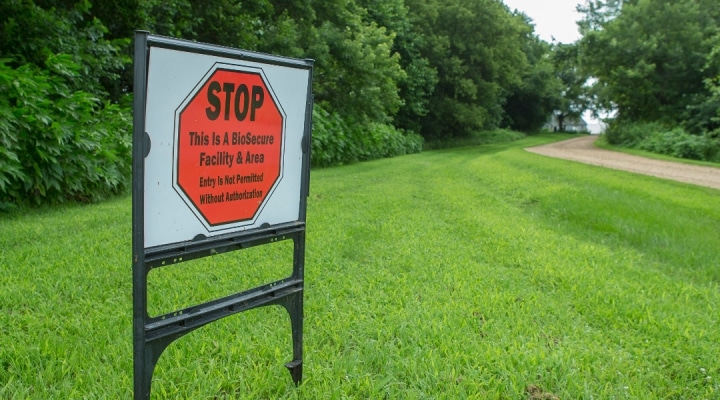 With ASF confirmed in the Dominican Republic, the first time it has been in the western hemisphere in 40 years, this work provides reassurance the U.S. pork industry and government agencies have identified the major routes of potential domestic introduction. (Photo: © 2018 National Pork Board Des Moines Iowa USA)

AMES, Iowa — A new year-long study to identify U.S. pork industry gaps in biosecurity defenses against foreign animal diseases, funded by the Pork Checkoff and the Swine Health Information Center (SHIC), found no major areas have been overlooked in efforts to prevent the introduction of African swine fever (ASF) to the United States. With ASF confirmed in the Dominican Republic, the first time it has been in the western hemisphere in 40 years, this work provides reassurance the U.S. pork industry and government agencies have identified the major routes of potential domestic introduction. The study, conducted by EpiX Analytics, LLC, reinforced the importance of continued on-farm biosecurity diligence for known pathways and identified feed and feed ingredient imports risks as a critical opportunity to bolster defenses against ASF.

“This EpiX review provided a third-party evaluation of potential gaps in national biosecurity that could put the U.S. swine industry at risk of a viral introduction. It is reassuring that the review did not find any gaps that we were not already aware of and working to address,” says Harry Snelson, DVM, executive director, American Association of Swine Veterinarians (AASV).

In total, EpiX considered eight FAD entry pathways: legal import of live animals, illegal import of live animals, import of pork products, import of feed and feed ingredients, fomites associated with international movements, international movement of people, transboundary movements of wildlife and vectors, and intentional and accidental release. Gaps were prioritized using a defined set of criteria. Extensive literature review along with input from an advisory group made up of representatives of academia, industry, and government were considered in EpiX process.

“EpiX’s results help direct further actions to protect the U.S. swine herd. Now we continue to collaboratively build on the efforts made to date and remain vigilant,” says Paul Sundberg, DVM, PhD, DACVPM, executive director, Swine Health Information Center (SHIC). “The study identified and looked into the vulnerabilities of bringing FADs into the U.S. Closing those pathways as best as possible along with the partnership of the producers’ on-farm biosecurity implementation to ensure FADs don’t get to pigs, if they are able to slip through, will ensure the continued safety of the U.S. swine herd.”

“While we are encouraged by the report’s overall assessment of the industry’s progress in reducing the risk of ASF introduction into the country, we know that there’s always more work to be done,” says Patrick Webb, DVM, acting chief veterinarian for the National Pork Board. “We must continue to work together to find real-world solutions for producers and their suppliers to implement that can help keep our national herd free of this costly virus.”

It is reassuring to confirm the U.S. pork industry, along with government agencies, has done a good job to date to identify potential pathways for introduction and biosecurity protocols to prevent introduction. For example, the vulnerability of illegal import of meat is being addressed by U.S. Customs and Border Protection along with USDA programs to decrease the risk. The EpiX work also validated the industry’s assumption that there is still vulnerability from imported feed and feed ingredients, thus encouraging continued scrutiny. Other vulnerabilities, such as feral swine and illegal or out-of-regulatory-compliance garbage feeding, were also identified by the study as areas for the pork industry to continue working to address.

“Knowing we have accurately identified the potential ASF pathways allows us to sharpen our focus on further strengthening biosecurity defenses in the right places,” said Dr. Liz Wagstrom, the National Pork Producer Council’s (NPPC) chief veterinarian. “These efforts include ongoing work by the Cooperative Feed Risk Task Force – with representation from the USDA, FDA, industry and academia – to inform feed purchasing, holding time and treatment practices.”

The study’s findings were presented to the AASV, NPB, NPPC and SHIC. These pork organizations continue to work collaboratively to prevent ASF, and other foreign animal diseases, from reaching domestic swine herds. This joint project reflects the commitment these groups have to serve and inform U.S. pork producers and protect the health of the domestic swine herd.

SHIC, launched in 2015 with Pork Checkoff funding, continues to focus efforts on prevention, preparedness, and response to novel and emerging swine disease for the benefit of US swine health. As a conduit of information and research, SHIC encourages sharing of its publications and research. Forward, reprint, and quote SHIC material freely. SHIC is funded by America’s pork producers to fulfill its mission to protect and enhance the health of the US swine herd. For more information, visit http://www.swinehealth.org or contact Dr. Sundberg at psundberg@swinehealth.org.