Home / Indiana / Study tackles soybean aphid problem
A new user experience is coming! We'll be asking you to login to your Morning Ag Clips account March 1st to access these new features.
We can't wait to share them with you! Read more here. 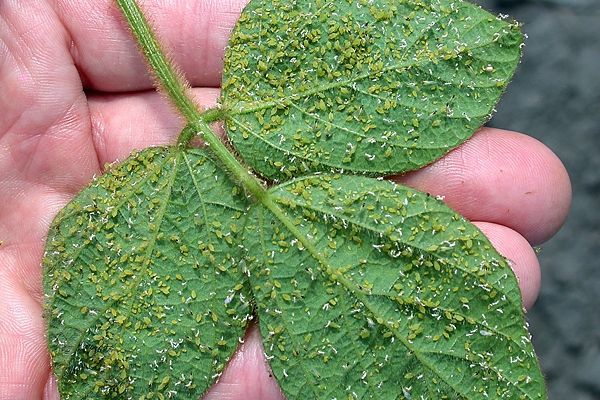 WEST LAFAYETTE, Ind. — About 89.5 million acres of soybeans will be planted across the United States in 2017 — a record high, according to the USDA. Research published in the April 2017 issue of Pest Management Science indicates that many of these soybean growers will invest in neonicotinoid insecticide seed treatments. The two-year, multi-state study revealed that, even during periods of infestation by the key pest across the region, the soybean aphid, the neonicotinoid treatment produced the same yields as using no insecticide at all.

The neonicotinoid insecticide thiamethoxam, which is applied as a coating to soybean seeds, provides a maximum of two weeks of protection against insect feeding. Aphids typically don’t reach damaging numbers until much later in the season, said Christian Krupke, an entomology professor and extension specialist at Purdue University and one of the researchers and authors of the study. As a result, when soybean aphid populations reached threshold levels, from late July to August, the insecticide levels in tissues of neonicotinoid-treated soybean foliage were similar to plants grown from seeds without the insecticide.

Bruce Potter, Insect Pest Management specialist for the University of Minnesota Extension, said one of the most important aspects of the study was providing soybean growers information about how to invest their funds.

Potter said soybean growers in northern regions, including Minnesota, don’t have chronic and consistent economic infestations of early season insect pests. “Farmers wouldn’t get an advantage from putting insecticide on soybean seeds,” he said. The exception to this conclusion would be fields at a higher risk for infrequent pests like seed corn maggot and white grub or for seed production fields where bean leaf beetle and bean pod mottle virus occur.

The research study concluded soybean farmers in all the regions in the study should employ the IPM approach, combining scouting and foliage-applied insecticide where necessary. “In terms of long-term sustainability and the bottom line for your yearly balance sheet, the IPM approach is the most effective approach for pest management in the growing season,” Krupke said.

A study examining neonicotinoid seed treatments of corn had a similar result. This study, published in the journal PLOS ONE in March 2017, was conducted by Krupke’s doctoral student, Adam Alford. It revealed that concentrations of the insecticide most commonly applied to corn seeds, clothianidin, declined rapidly and approached zero in plant tissues within 20 days after planting. Less than 5 percent of what was applied to the seed was recovered from corn plants in the field.

Currently, at least one of two neonicotinoids, clothianidin or thiamethoxam, are routinely applied to more than 80 percent of the corn and over half of the soybeans grown in North America.

Previous studies, although smaller in size, had shown similar results with neonicotinoid seed treatments, which were introduced in the 1990s, said Kelley J. Tilmon, state extension specialist for the Ohio Agricultural Research and Development Center and an associate professor of entomology at Ohio State University. She performed the research in South Dakota when she was on the faculty of South Dakota State University.

Janet J. Knodel, extension entomologist and associate professor at North Dakota State University, said the results were similar in North Dakota. “As part of our research, we saw the soybean aphids coming into the field in late July and early August in North Dakota,” she said. “By then, the residual of the insecticide seed treatment is gone.”

Farmers can consult with their local university Extension services for additional information on specific pest management strategies in their state. They also can obtain information by downloading the Purdue Extension publication “The Effectiveness of Neonicotinoid Seed Treatments in Soybean” at http://bit.ly/2pZ8IBi.

Are your grow/finish barns summer ready?

Ventilation system to be featured at Expo