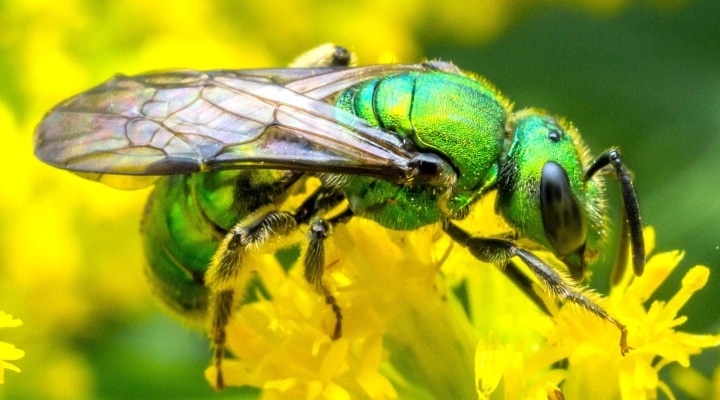 Over a six-year period in southcentral Pennsylvania, measures of biodiversity among wild bee communities declined and one-third of species experienced decreases in abundance, according to a Penn State-led team of researchers. Findings from their recently published study, the researchers contend, demonstrate the value of standardized, season-wide sampling across multiple years for identifying patterns in bee biodiversity and monitoring population trends among species. (photo by Penn State)

UNIVERSITY PARK, Pa. — Over a six-year period in southcentral Pennsylvania, measures of biodiversity among wild bee communities declined and one-third of species experienced decreases in abundance, according to a Penn State-led team of researchers.

Findings from their recently published study, the researchers contend, demonstrate the value of standardized, season-wide sampling across multiple years for identifying patterns in bee biodiversity and monitoring population trends among species.

“Pollinators facilitate the reproduction of more than 80% of flowering plants and increase the yield of about three-fourths of crop species,” said study lead author Nash Turley, postdoctoral scholar in entomology in Penn State’s College of Agricultural Sciences.

“Bees are one of the most important groups of pollinators, but previous research has found troubling declines among wild bees,” he said. “For example, the range and abundance of some species have shrunk substantially, especially bumble bees in North America and Europe. Tracking changes in bee biodiversity is important for developing pollinator management plans that can help sustain wild plant communities and maximize crop yields.”

In this study, the research team set out to characterize changes in bee community biodiversity and changes in abundance of specific species, both during individual years and from year to year, covering the period from 2014 to 2019. The study took place in and around Penn State’s Fruit Research and Extension Center, near Biglerville in Adams County.

“These orchards are in a landscape that has high diversity and abundance of native plants and pollinators,” said study co-author David Biddinger, tree fruit research entomologist and professor of entomology at the Fruit Research and Extension Center. “Only about 8% of the landscape is active orchards, and all of them are successfully pollinated only by wild pollinators.”

The researchers, who recently reported their results in “Ecology and Evolution,” examined more than 26,700 individual bees representing five bee families, 30 genera and 144 species. “We collected 33% of the total number of bee species that have been found in Pennsylvania,” Turley said.

Ten species had more than 1,000 individuals collected, while over half of the species had five or fewer individuals. “It is typical in nature for there to be a few, very abundant species and many rare species,” Turley explained.

The researchers spotted three general patterns by month. Some solitary species emerged early in the year and had a short period of activity. Other solitary, ground-nesting species also had short periods of activity, but in the summer rather than in spring. The third group was composed mostly of social species with much longer periods of seasonal activity.

Such seasonal variation is an important target for monitoring, according to study co-author Margarita López-Uribe, associate professor of entomology and Lorenzo L. Langstroth Early Career Professor.

“These groups of bees provide unique ecological functions,” she said. “For example, many of the early emerging bee species are of critical importance for early flowering plants such as spring ephemeral wildflowers, and these bee-plant interactions may be particularly sensitive to disruptions from climate change. And many crops, such as apples and blueberries, rely on pollination by early emerging wild bees.”

The evidence of changes in biodiversity over years also was strong, the researchers noted. For instance, the average abundance of bees captured declined by 48%, and the number of species detected fell by 41%.

At the species level, monitoring suggested that 26 species were stable over time, with no detectable change in abundance. However, 13 species, or about one-third of the species for which researchers had sufficient data, declined in abundance between 2014 and 2019. Many of the declining species were bumble bees and sweat bees, Turley said. By contrast, only one species increased in abundance during the study period.

The researchers pointed out that it will take more years of monitoring to determine if the changes they observed over time are part of a larger trend or a consequence of year-to-year fluctuations.

“Wild bee communities are diverse and dynamic, and little is known about what species or groups have the greatest conservation needs,” López-Uribe said. “Our findings could help to quantify the effects that different aspects of environmental change have on bee communities and to identify species of conservation concern.”

Also contributing to the research was Neelendra Joshi, associate professor, Department of Entomology and Plant Pathology, University of Arkansas.