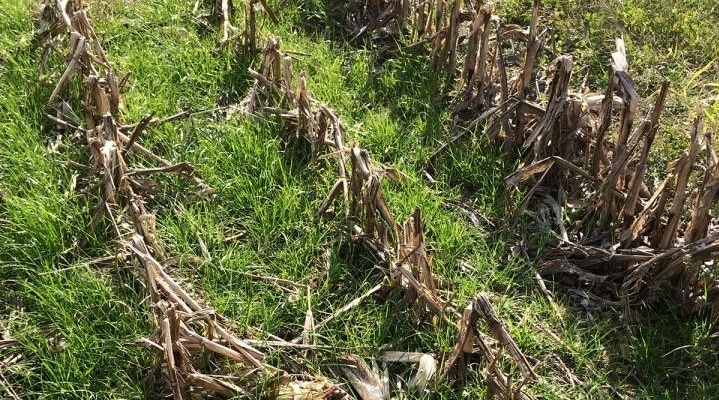 URBANA, Ill. — Only a fraction of conventional row crop farmers grow cover crops after harvest, but a new global analysis from the University of Illinois shows the practice can boost soil microbial abundance by 27%.

“A lot of ecological services are done by the soil microbiome, including nutrient cycling. It’s really important to understand how it functions and how agriculture can form a healthier soil microbiome,” says Nakian Kim, doctoral student in the Department of Crop Sciences at the University of Illinois and lead author on a new paper in Soil Biology and Biochemistry.

Other studies have shown benefits of cover cropping on the soil microbial community, but most of them have been one-offs influenced by specific site conditions, unique seasonal effects, idiosyncratic management regimes, and the researchers’ chosen analysis methods. Kim’s work is different in that he looked for universal patterns among dozens of these one-off studies.

“Our analysis shows that across 60 field studies, there was a consistent 27% increase in microbial abundance in fields with cover crops versus no cover crops. It’s across all these studies from around the world,” says Maria Villamil, associate professor in crop sciences and co-author on the paper.

The research team performed a search of the existing studies on cover crops, and wound up with some 985 scientific articles. Of these, they only kept studies that directly compared cover crops and bare fallow soils, and omitted studies conducted in greenhouses or that treated crop residues as cover crops. They also ensured that the studies were statistically sound, with reasonably large sample sizes. In the end, they mined and reanalyzed data from 60 studies reporting on 13 soil microbial parameters.

“That’s why the criteria of selection had to be so strict. We wanted to compare studies that were solid, and with enough replications that we could make valid claims about global patterns,” Villamil says.

“All the categories are important, but especially diversity, because a diverse microbiome is more resilient. Considering the close linkage between microbial diversity and the provision of ecosystem services, small impacts could go a long way to increase sustainability. In that sense, I think the cover crops are really helping,” Kim says.

The researchers were also able to tease out several factors that layered on top of the main effect of cover crops. For example, how did climate, cover crop termination method, or tillage regime affect the ability of the cover crops to benefit the soil microbial community?

Kim says the use of burndown herbicides as a cover crop termination method had a strong moderating effect on the microbial community. “The results were very interesting. With chemical termination, the effect sizes were consistently smaller compared to mechanical termination. In other words, the benefits from the cover crops are diminished somehow from the herbicides. I think that’s one big takeaway.”

Tillage also made a difference, according to Kim. He expected conventional tillage to reduce the effect of cover crops on the soil microbes, but instead, conservation tillage did that. “My guess is that because conservation tillage included not tilling at all, that allowed weeds to grow on the land. The weeds could have mimicked what the cover crops do. So the difference between the control treatment and the cover crop may decrease because of the weeds.”

Because their effects were indirect, these secondary factors need more research before real claims can be made. Villamil’s research team already has studies in the works to get more definitive answers. But in the meantime, she’s heartened by the results of the analysis as a whole.

“For me, it was surprising to see the consistent, positive effect of cover crops – surprising but good. Finally! I’ve been researching cover crops in our typical corn-soybean rotations in Illinois since 2001, yet in these high-fertility environments, it has proven difficult to show any effects beyond cereal and annual rye capturing nitrogen (weather permitting). Changes in chemical and physical properties related to cover crop use are difficult to see,” Villamil says. “But the microbiome, that’s where it’s at. That’s how everything is related. Thanks to this work, I have something to look forward to when I put in cover crops, and have generated many more questions in need of research.”