Home / National / Study shows common insecticide is harmful in any amount
A new user experience is coming! We'll be asking you to login to your Morning Ag Clips account March 1st to access these new features.
We can't wait to share them with you! Read more here. 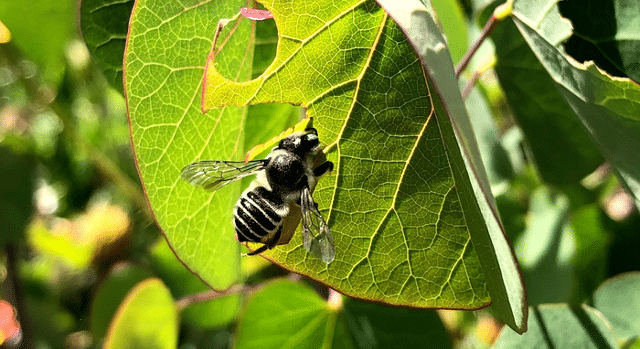 An alfalfa leafcutter bee, the type used by UC Riverside scientists to study the effects of pesticide and water levels. (Photo: David Rankin/UCR)

RIVERSIDE, Calif. — A new UC Riverside study shows that a type of insecticide made for commercial plant nurseries is harmful to a typical bee even when applied well below the label rate.

The study was published today in the journal Proceedings of the Royal Society B: Biological Sciences.

Chemically similar to nicotine, neonicotinoids are insecticides that protect against plant-consuming insects like aphids, but seriously harm beneficial insects, like bees. They are widely used by commercial growers.

Much research has focused on their use in food crops like canola, in which they are typically applied at low doses. However, this study is one of the few to examine neonicotinoid application in potted ornamental plants, which can represent more potent, acute sources of exposure to the toxin for bees.

“Neonicotinoids are often used on food crops as a seed treatment,” explained UCR entomologist and lead study author Jacob Cecala. “But they’re usually applied in higher amounts to ornamental plants for aesthetic reasons. The effects are deadly no matter how much the plants are watered.”

Cecala said he was surprised by this result, given that neonicotinoids are water soluble. Going into the study, he assumed that more water would dilute the amount of harm they caused the bees. The researchers were also curious whether increased watering could benefit bees despite insecticide exposure by increasing the quantity or quality of nectar offered by the plants.

To test these assumptions, the researchers raised bees on flowering native plants in pots that either received a lot of watering, or a little. Plants were selected based on their popularity at nurseries, drought tolerance to ensure blooming even without much water, and their attractiveness to bees. In addition, half the plants were treated with the insecticide.

Though increased water decreased the pesticide’s potency in the nectar of the flowers, the negative effects on bees were still observed.

“Unfortunately, we observed a 90% decrease in the bees’ reproduction with both high and low levels of irrigation,” Cecala said.

This study is also one of the few to examine neonicotinoid effects via ornamental plants on solitary bees, which make up more than 90% of native bee species in North America, and an even higher percentage in California.

Solitary bees are not bees who have left the hive and are now alone. This is a type of bee that lives alone, does not produce honey, and does not have a queen or live in a hive. Because they do not have a store of honey to protect, they are also not aggressive.

“Solitary bees are more representative of the ecosystem here, and they are potentially more vulnerable to pesticides,” said UCR entomologist and study co-author Erin Rankin.

If a worker bee that is social — like the honeybee — gets exposed to insecticide and dies, it won’t necessarily affect the longevity of the hive. However, if a solitary bee dies, its lineage is cut short.

In this study, the researchers used alfalfa leafcutter bees, which make their nests in tunnels and lay eggs one at a time. They are very similar to California’s solitary native bees and are part of a genus that can be found worldwide.

The first time Cecala and Rankin tried this experiment, they used the concentration of insecticide recommended on the product label. All the bees died in a matter of days.

The next time they ran the experiment, they used a third of the recommended dose and still found negative effects on reproduction, the ability of the bees to feed themselves, and overall fitness. “It almost completely wiped them out,” Cecala said.

Though this study used a neonicotinoid product formulated for nurseries, formulations of similar products for home gardeners also tend to be highly concentrated.

Plants in nurseries or residential backyards represent a smaller total area than food plant fields like corn or soy. However, high-potency neonicotinoid products can have a big effect even in small areas. In 2013, neonicotinoids applied to flowering trees in a retail parking lot in Oregon caused a massive bumblebee die off, with more than 25,000 found dead.

The researchers recommend that nurseries quantify the amount of pesticides that are making their way into flowers given their watering and pesticide regimes, and consider alternative management practices that reduce harm to bees and the ecosystems dependent on them.

“It’s not as simple as ‘don’t use pesticides’ — sometimes they’re necessary,” Cecala said. “However, people can look for a different class of insecticide, try to apply them on plants that aren’t attractive to bees, or find biological methods of pest control.”

How do soils and humans impact one another?