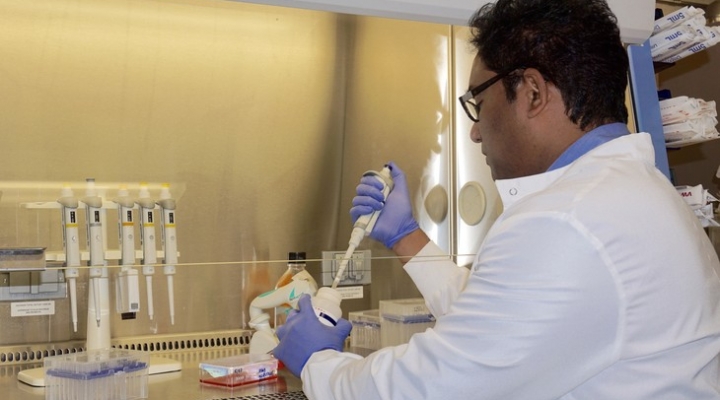 Suresh Kuchipudi, associate professor of virology in Penn State's College of Agricultural Sciences, conducted research to determine if little brown bats can be asymptomatic carriers of avian and human influenza viruses. Here, he infects cells with influenza virus as part of those studies. (Sanjana Kuchipudi)

UNIVERSITY PARK, Pa. — Bats, which make up about a third of all mammalian species, play an important role in our ecosystem. They eat bugs that “bug” us, pollinate more than 500 species of plants, including banana and cacao, and distribute the seeds of many other plants.

However, they also can carry diseases that are dangerous to humans, such as rabies.

But they were never thought to host influenza viruses, until researchers studying pathogen diversity in bats in South and Central America identified two new influenza viruses in fruit bats. Subsequently, researchers in Africa found 30 percent of the bats they tested were infected with a flu virus, although these bats did not show any signs of illness.

These discoveries led Suresh Kuchipudi, associate professor of virology in Penn State’s College of Agricultural Sciences, to ask: Can bats be co-infected with avian and human influenza viruses? If so, can they act as carriers of influenza virus? Do they have the potential to contribute to the emergence of new pandemic influenza strains by mixing these two types of influenza viruses?

To answer these questions, Kuchipudi brought together a multidisciplinary team to conduct research focusing on little brown bats, the most widely spread bat species in North America.

“Although bats are elusive creatures, there is increasing interface between them and humans as a result of wildlife trade, bush-meat hunting, deforestation and urban development,” said Kuchipudi, who works in the college’s Animal Diagnostic Laboratory. “It’s important to determine if bats can allow infection of avian and human flu viruses, and if they could then serve as ‘mixing vessels’ and perhaps create the next pandemic flu virus. Up until now, no one has ever studied influenza virus receptors in bats.”

Influenza infects a wide range of domestic and wild animals. Some are highly specific to one kind of host, but others can be passed between species. “Swine flu” and “avian flu” are examples of previous pandemics in humans caused by influenza viruses that came from animals. Avian flu viruses continue to cause huge economic losses to the poultry industry and can threaten public health if they gain the ability to cross over into humans. Co-existence with another kind of flu virus in some other species, such as a bat, could provide them the genetic material they need to jump species.

The team tested for the presence of two specific receptors that are responsible for helping human and avian influenza viruses attach to cells. They further investigated whether avian and human flu viruses can bind to bat tissues.

“The study discovered that bats have the receptors in their respiratory and digestive tracts that are able to support binding of avian and human influenza viruses,” said Ruth Nissly, research technician and manager of Kuchipudi’s research lab. “Having both receptors, as in the case of ducks and pigs, is believed to create conditions that enable the virus to mutate and create a new strain, which, in turn, could infect other animals, including humans.”

Despite these findings, Kuchipudi said there is not yet a need to worry about a “bat flu.”

“While the sum of the evidence suggests that bats could play an important role in influenza epidemiology and zoonotic influenza emergence, we do not have sufficient scientific understanding to adequately predict which influenza strains may cause the next pandemic or what hosts they may come from,” he said.

He cited the need for more research on how influenza may manifest itself in bats, as well as for additional surveillance of wild bats.

Other Penn State researchers on the project were Shubhada Chothe, doctoral candidate in pathobiology, who carried out many of the experiments; Gitanjali Bhushan, undergraduate student in immunology and infectious disease; Yin-Ting Yeh, postdoctoral scholar in physics; Jenny Fisher, clinical assistant professor in veterinary and biomedical sciences; Mauricio Terrones, professor of physics, chemistry and materials science and engineering; and Bhushan M. Jayarao, professor of veterinary and biomedical sciences.

The research, funded by Penn State’s Veterinary and Biomedical Sciences Department, Eberly College of Science and the U.S. Fish and Wildlife Service was published in April 2017 in Scientific Reports, an online, open access journal from the publishers of Nature.

Response to a vexing cattle market