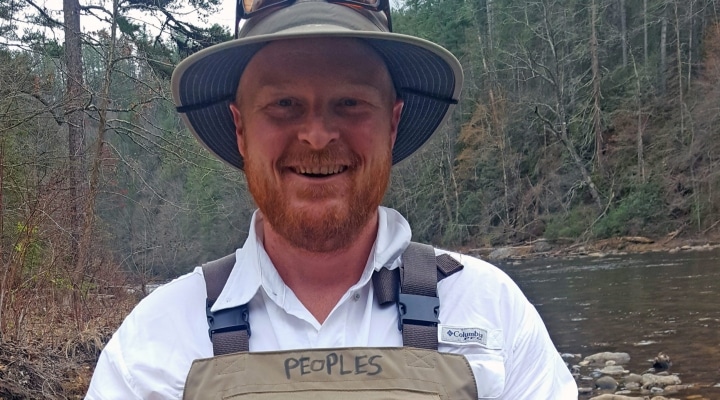 According to a research article published Aug. 18 in the open-access, peer-reviewed PLOS ONE, the amount of fishing in the spring of 2020 was significantly greater — by roughly 0.2 trips per angler — than in non-pandemic springs. The article was co-authored by Brandon Peoples, an assistant professor of Fisheries Ecology in Clemson University’s Forestry and Environmental Conservation Department, and the study was led by LSU Department of Oceanography & Coastal Sciences Assistant Professor Stephen Midway.

CLEMSON, S.C. — While the COVID-19 pandemic put a damper on many hobbies, recreational anglers saw it as an opportunity to practice a little extra “social fishtancing.”

According to a research article published Aug. 18 in the open-access, peer-reviewed PLOS ONE, the amount of fishing in the spring of 2020 was significantly greater — by roughly 0.2 trips per angler — than in non-pandemic springs. The article was co-authored by Brandon Peoples, an assistant professor of Fisheries Ecology in Clemson University’s Forestry and Environmental Conservation Department, and the study was led by LSU Department of Oceanography & Coastal Sciences Assistant Professor Stephen Midway.

“The COVID-19 pandemic has affected us all in different ways — many people suddenly found themselves with lots of free time, but with restricted access to certain types of activities,” Peoples said. “We were interested to see if that affected how or why people fish.”

As things began to shut down last spring, fisheries scientists at LSU, U.S. Geological Survey and Clemson saw an opportunity to examine how the pandemic was affecting recreational anglers. An online survey was launched from July to August 2020 and received nearly 18,000 responses across 10 states.

The researchers asked recreational anglers 20 questions, including whether they fished more or less during the pandemic than before it began, what their motivations were and if they thought fishing is safe in terms of COVID-19 exposure.

“What we found is people still fished and, in fact, they fished a little bit more during the pandemic,” Midway said.

Four out of five anglers reported that they fished as much during the pandemic as before, while one out of the five fished more — taking about one additional trip in the spring — and many of those who participated pointed to feeling safe in the relative isolation of the activity, a concept the article refers to as “social fishtancing.”

“Among anglers who reported being affected by COVID, ‘mental stress’ was the most reported effect,” Peoples said. “Anglers had many motivations for fishing, such as fishing for thrills or food. However, during the pandemic, the most common motivation was for stress relief. Because most anglers reported that they consider fishing to be ‘extremely safe,’ overall the results suggest that fishing was potentially a safe way for many people to find a way to relax during this stressful time.”

Another of the conclusions drawn from the study was the increase in fishing effort was more pronounced for anglers who lost work hours or lost jobs — with more than half of that group indicating increases in recreational fishing — suggesting that angling is a valuable outlet in challenging times.

And with more than 44 million people in the U.S. identifying as recreational anglers, the hobby is second only to jogging in terms of popular outdoor activities. Thus, during a time when many areas of the national economy were negatively affected, fishing remained an important part of the U.S. economy that supports many people’s livelihoods.

“Funds from fishing license sales and taxes on fishing gear, fuel, etc., also support important programs for conservation of native fishes and their habitats,” Peoples said. “Hopefully, sustained participation in this activity may mean those people and programs weathered the pandemic well.”

South Carolina was one of 10 states whose recreational anglers participated in the study, along with Arkansas, Connecticut, Florida, Missouri, North Carolina, Texas, Utah, Wyoming and Iowa.

And although the study didn’t focus on license sales or economic data, Midway agreed that, by and large, fishing equated with spending money and thus clearly benefitted the economy.

“You may have bought your fishing rod and reel 10 years ago, but when you go fishing, you buy bait, put gas in your car or boat, buy ice, buy a fishing license and possibly pay for a boat slip,” Midway said. “There’s a significant amount of money that gets distributed throughout the economy through the travel cost of fishing including that one extra fishing trip.”

Jeff Kopaska, fisheries research biometrician with the Iowa Department of Natural Resources, said the study was also quite valuable to state fisheries agencies because it helped to identify what the broad motivations were for people to increase their fishing activity.

“State agencies were well aware that many more fishing licenses were being sold during the pandemic, and everyone had some opinion ‘why,’” Kopaska said. “This work identified that fishing was perceived as a safe, stress-relieving activity, which will now help agencies to fine-tune messaging to try to keep people fishing in the future.”

AgTech NEXT 2021 kicks off with CEO panel September 1

Sunbelt and Swisher celebrate Farmers of the Year