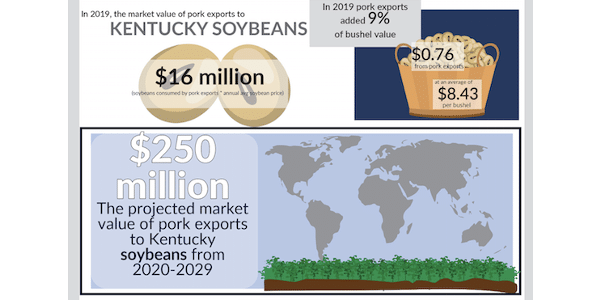 PRINCETON, Ky. — Since 2015, indirect exports of corn and soybeans through beef and pork exports have been the fastest-growing category of corn and soybean use, delivering critical returns for farmers. These producers support the international promotion of U.S. beef, pork, and lamb by investing a portion of their checkoff dollars in market development efforts conducted by the U.S. Meat Export Federation (USMEF).

“As soybean farmers, we are used to focusing on that export market. We like to export whole beans, soybean meal, whatever our customer wants. But we are just as glad to export meat from animals that consumed soybean meal as a high-protein part of their diet before they entered the food chain,” said Fred Sipes, who serves as the Kentucky Soybean Board’s representative to USMEF.

“I grow soybeans and corn, and I background beef cattle in Meade County,” Sipes said. “Knowing that feeding my cattle soybean meal and pelletized soybean hulls is helping not only my livestock operation, but the row crop side as well, is a real win-win for F.L Sipes Farms,” he said, “and I’m sure that my fellow soybean farmers who raise hogs feel the same way.”

USMEF has released an updated version of the independent study aimed at quantifying the value red meat exports provide to U.S. corn and soybean producers. The original study was conducted in 2016 with updates released in 2018 and 2019. Key findings from the latest version, which utilizes 2019 export data, include:

Value to U.S. Soybean Crop from Red Meat Exports
• In 2019, pork exports contributed 9% of the per bushel price of soybeans ($0.76/bushel) of an annual average price of $8.43. With total production of 3.55 billion bushels, the value of pork exports was $2.7 billion to the U.S. soybean crop, $59 million in Kentucky alone.

Dave Juday, senior analyst for World Perspectives, Inc., who conducted the original study and subsequent updates, said, “soybean prices last year trended lower overall, so the total value of pork exports to U.S. soybeans – in terms of cents per bushel – is not as large as in our last update. But the value-added as a percentage of the per bushel price remained steady.” 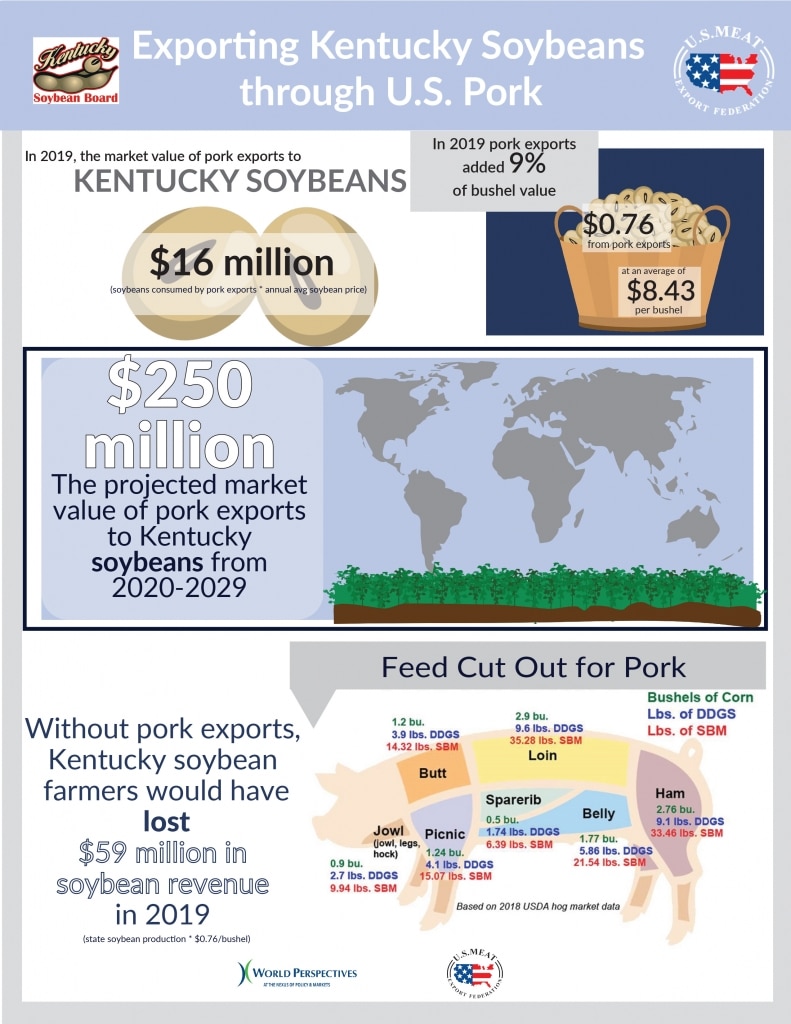