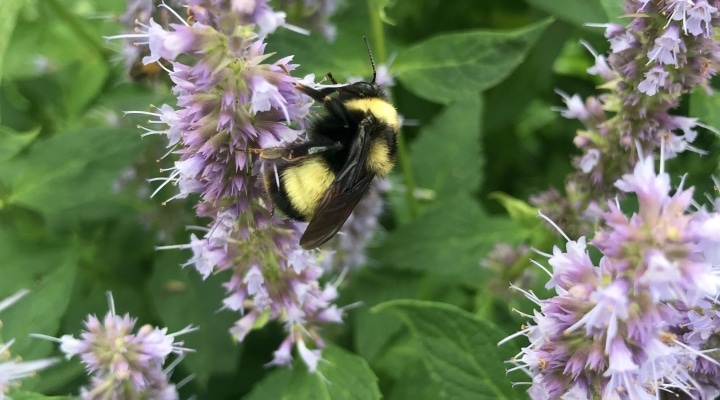 UNIVERSITY PARK, Pa. — Popular species of perennial flowering plants vary widely in their attractiveness to pollinators, but homeowners and landscape managers who select certain perennial cultivars can support a diverse community of pollinators in their own backyards, according to a new study from a team of Penn State researchers.

Insect pollinators are critical in agriculture and natural ecosystems, but these pollinators have experienced global population declines, largely driven by a loss of flowering plants in their landscapes, which they depend on for food.

“We know that greenspaces such as parks and gardens in many human-modified landscapes have the potential to support very rich pollinator communities, including rare or vulnerable species,” said study lead author Emily Erickson, postdoctoral scholar in entomology in the College of Agricultural Sciences. “However, urban and suburban pollinator communities tend to lack the diversity they require to be resilient to further disturbances.”

Erickson noted that many studies have shown that increasing the availability of attractive flowering plants is one of the most effective and accessible ways to increase pollinator diversity in urban landscapes. “But a key challenge,” she said, “is identifying the combinations of plant species that can support and engineer a diverse, and therefore more stable, pollinator community.”

Co-author Christina Grozinger, Publius Vergilius Maro Professor of Entomology and director of Penn State’s Center for Pollinator Research, explained that in urban and suburban areas, people often select varieties of ornamental plants for their gardens because of their appearance and growth habits.

“Many of these varieties have been developed by breeders to appeal to consumer, rather than pollinator, preference,” said Grozinger, who also directs the Insect Biodiversity Center in the Huck Institutes of the Life Sciences. “There has been concern that these plant varieties are no longer attractive to pollinators.

“Cultivars are bred for variation in characteristics such as structure, color, and bloom size and duration, all of which are known to influence pollinator attraction,” she said. “We also know from previous studies that closely related cultivars can vary significantly in their attractiveness to pollinators.”

To help optimize the ecological value of urban and suburban greenspaces and develop accurate recommendations for home gardeners and landscapers, the researchers studied 25 cultivars from five plant genera — Agastache (giant hyssop, hummingbird mint); Echinacea (coneflower); Nepeta (catmint); Rudbeckia (black-eyed Susan); and Salvia (sage) — that a recent USDA grower survey indicated were commercially popular in the North American floriculture market. They evaluated each variety’s attractiveness to pollinators across the growing season for two years at two sites, each of which previously was found to host a diverse community of pollinators.

“We found that these plants can attract bees, flies, butterflies and beetles, including many rare and vulnerable bee species,” said co-author Harland Patch, assistant research professor of entomology and director of pollinator programming at The Arboretum at Penn State. “But some cultivars are more attractive than others. A garden of the six most attractive plant cultivars will attract nearly 80 species of bees, while a garden of the six least attractive cultivars will attract only 20 bee species.”

The study results, published recently in the journal Scientific Reports, found that Agastache ‘Blue Fortune’ giant hyssop received the most pollinator visitors. Other varieties with a higher abundance of visitors were Agastache ‘Foeniculum’ and ‘Black Adder,’ Nepeta ‘Faassenii’ and ‘Walker’s Low,’ and Rudbeckia ‘Triloba’ and ‘Herbstonne.’ Many of these same varieties also attracted the greatest diversity of bee species, including rare and vulnerable species.

The total abundance and diversity of bee visitors to the different plant genera varied seasonally. The researchers noted that pollinator species vary in the time of year when they emerge and seek food sources.

“As a result, a complete pollinator habitat will include flowering plants with bloom times that overlap to ensure a consistent availability of foraging resources,” said Erickson, who added that plant diversity in the landscape also was correlated with abundance and diversity of pollinator visitors. “Although cultivars of some genera, such as Salvia and Nepeta, are not highly attractive overall, they can play an important role by providing foraging resources early in the season, particularly when combined with other high-bloom spring resources such as flowering trees.”

The researchers point out that plants with larger floral displays, such as cultivars of Rudbeckia and Agastache, can support many bee species, including some rare species. Therefore, these varieties are candidates to be planted in multiples and should be prioritized when planting a pollinator garden.

“Other species with comparatively small floral displays and lower attractiveness to pollinators, such as cultivars of Salvia and Echinacea, can be planted more sparingly while still contributing to overall floral diversity and abundance in the landscape,” Grozinger said. “An understanding of this relationship between ecological function, plant attractiveness and floral display size can be applied to garden design — particularly in areas with space limitations.”

A Specialty Crop Research Initiative grant from the U.S. Department of Agriculture’s National Institute of Food and Agriculture supported this work.

Somewhere for the pollinators to go
November 23, 2021

Do flies really throw up on your food when they land on it?
November 8, 2021