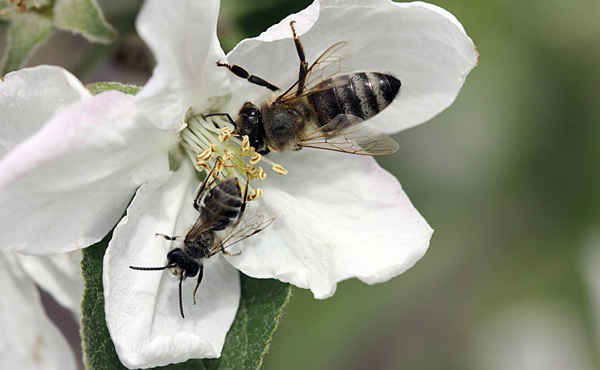 A honey bee worker and a male mining bee on an apple flower. (Courtesy of Martin Husemann)

HALLE, Germany — Citrus fruits, coffee and avocados: The food on our tables has become more diverse in recent decades. However, global agriculture does not reflect this trend. Monocultures are increasing worldwide, taking up more land than ever. At the same time, many of the crops being grown rely on pollination by insects and other animals. This puts food security at increased risk, as a team of researchers with help from Martin Luther University Halle-Wittenberg writes in the journal Global Change Biology. For the study, the scientists examined global developments in agriculture over the past 50 years.

The researchers analysed data from the United Nations’ Food and Agriculture Organization on the cultivation of field crops between 1961 and 2016. Their evaluation has shown that not only is more and more land being used for agriculture worldwide, the diversity of the crops being grown has declined. Meanwhile, 16 of the 20 fastest growing crops require pollination by insects or other animals.

“Just a few months ago, the World Biodiversity Council IPBES revealed to the world that up to one million animal and plant species are being threatened with extinction, including many pollinators,” said Professor Robert Paxton, a biologist at MLU and one of the authors of the new study. This particularly affects bees: honeybees are increasingly under threat by pathogens and pesticides, and populations of wild bees have been on the decline around the world for decades.

Fewer pollinators could mean that yields are much lower or even that harvests fail completely. However, risks are not spread equally across the world. The researchers used the FAO data to create a map showing the geographical risk of crop failure.

“Emerging and developing countries in South America, Africa and Asia are most affected,” said Professor Marcelo Aizen of the National Council for Scientific and Technological Research CONICET in Argentina, who led the study. This is not surprising, he says, since it is precisely in these regions where vast monocultures are grown for the global market. Soy is produced in many South American countries and then exported to Europe as cattle feed. “Soy production has risen by around 30 percent per decade globally. This is problematic because numerous natural and semi-natural habitats, including tropical and subtropical forests and meadows, have been destroyed for soy fields,” Aizen said.

According to the authors, current developments have little to do with sustainable agriculture, which focuses on the food security of a growing world population. And, although poorer regions of the world are at the greatest risk, the consequences of crop failure would be felt worldwide: “The affected regions primarily produce crops for the rich industrial nations. If, for example, the avocado harvest in South America fails, people in Germany and other industrial nations may no longer be able to buy them,” concludes Robert Paxton, who is also a member of the German Centre for Integrative Biodiversity Research (iDiv) Halle-Jena-Leipzig.

The researchers advocate for a trend reversal: Care should be taken to diversify agriculture worldwide and make it more ecological. This means, for example, that farms in particularly susceptible countries should grow a diversity of crops. In addition, farmers all over the world would need to make the areas under cultivation more natural, for example by planting strips of flowers or hedgerows next to their fields and by providing nesting habitats on field margins. This would ensure that there are adequate habitats for insects, which are essential for sustainable and productive farming.

Top stocks that could benefit from hemp rule

Extension partners to fill gap for hungry students
May 5, 2020