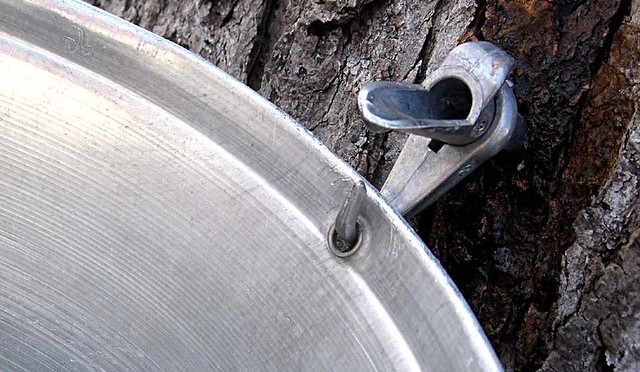 According to modeling projections, by the end of the century, the team found that tapping season is projected to be, on average, one month earlier. (fly, Flickr/Creative Commons)

HANOVER, N.H. — Once winter nights dip below freezing and the days warm up above freezing sap begins to flow in sugar maples marking the start of the syrup season. U.S. maple syrup production is a global industry, which has been increasing by nearly 10 percent per year over the past decade according to the USDA’s National Agricultural Statistics Service 2017. With climate change, daily temperatures are on the rise, which affects sap flow and sugar content. By 2100, the maple syrup season in eastern North America may be one month earlier than it was during 1950 and 2017, according to a study published in Forest Ecology and Management.

Maple syrup production is impacted by two climate sensitive factors: sugar content, which is determined by the previous year’s carbohydrate stores and sap flow, which depends on the freeze/thaw cycle. As a sugar maple tree thaws, the frozen sap begins to move through the tree.

The research team sought to test how monthly and season-long average temperatures during the tapping season, and temperature and precipitation from the preceding year, affect sap flow.

Each day of the tapping season (from January to May) across the study regions, researchers obtained sap samples from 15 to 25 mature sugar maple trees. They measured the volume and weight of the sap and conducted an analysis of the sap’s sugar content. Daily temperature readings were also taken. With this data, the team could then look at the annual variability of the sap flow, to see how the data varied from tree to tree and from year to year.

Based on historical climate data, the researchers examined how past changes in minimum and maximum temperatures affected sap flow at each of the sites. They created a model that predicted the timing for optimal sap flow based on historical temperature data pertaining to the freeze-thaw days, actual sap collection from their fieldwork, and monthly climate. To calculate projections on how climate change will affect maple syrup production, the team used climate models based on the RCP 8.5 carbon emissions scenario, which follows current emissions trends.

The study found that most sap collection seasons were 45 days or fewer and that the middle of the sugar maple tapping season tended to fall in March or later for three-quarters of the sites.

According to modeling projections, by the end of the century, the team found that tapping season is projected to be, on average, one month earlier. In addition, it is likely that by 2100, Virginia and Indiana will barely be able to produce any sap while production in Québec will be considerably enhanced. Of the states in the study, New Hampshire and Vermont (not one of the sample sites but for which climate data was analyzed) are likely to be the least affected but will still experience decreases in syrup production. By the end of the century, most of the areas containing sugar maples in the U.S. are projected to see decreases in maple syrup production while areas in northern Ontario and Québec may see moderate to large increases in production. In addition, the concentration of sap sugar is likely to become lower and more variable (28-36% lower across the modeled sites).

“As the climate gets warmer, the sugar maple tapping season will shrink and will get closer to a December date. Maple syrup producers may want to consider adapting their technologies and collection logistics in advance, so that they are prepared for how climate change is going to affect production,” said co-author David Lutz, a research assistant professor of environmental studies at Dartmouth.

In the U.S. alone, maple syrup production was valued at $141 million in 2017 according to the U.S. Department of Agriculture. As for world share, the Federation of Québec Maple Syrup Producers reported in 2017 that Canada is home to 80 percent of world maple syrup production of which 72 percent is produced in Québec, and 20 percent is produced in the U.S.

The researchers call for additional studies on climate change and maple syrup production, which can help maple syrup producers, forest managers and policymakers prepare for changes that are already impacting a multimillion-dollar industry.