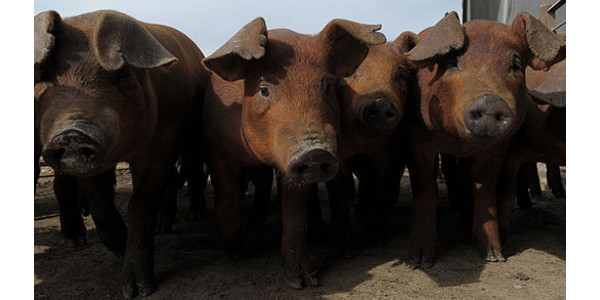 Consumers have rated pork products more tender even as market weights have been increasing. (Courtesy of K-State Research and Extension)

MANHATTAN, Kan. — In a consumer-driven business, the pork industry benefits from giving grocery shoppers what they’re looking for.

So meat scientists’ recent findings that consumers are routinely happy with larger cuts – and the resulting tenderness profiles – can be looked at as good news for pork producers.

“One of the results of increased genetics and improved nutrition is that the pork industry has been able to get pigs to heavier market weights a lot more efficiently,” said Travis O’Quinn, a meat scientist with K-State Research and Extension.

“When we harvest those animals at heavier weights, the resulting impact is that we end up with larger cuts that come off those animals, ultimately resulting in larger pork chops when consumers go to the grocery store.”

“We brought consumers in and fed them the pork chops and didn’t tell them anything about them other than that they were pork chops,” O’Quinn said. “The consumers’ (responses indicated) that the bigger the animal was, the more tender the product was. When we looked at flavor and juiciness and how much they liked their product overall, there was no difference. We were able to see in the heavier-weight pigs that we did have more tender products.”

O’Quinn said consumers mistakenly thought the price per pound was too high, rather than realizing that the overall price was higher due to the higher weight of the chops in the package.

“To our surprise, when we had the case with no information, the consumers generally liked the bigger chops,” said Emily Rice, a K-State graduate student who conducted the study under O’Quinn’s supervision. “But when we put the prices on there, there became a limit to how big those chops could actually be for the consumers to say they were willing to actually purchase them.

The study’s results will be presented during the K-State Swine Day, scheduled for Thursday, Nov. 15, at the K-State Alumni Center in Manhattan. The study was supported by the National Pork Board and Minnesota-based Holden Farms.

“When we look at the results of this study, it really is a win-win situation,” O’Quinn said. “Producers know they are producing a high-quality product. If all trends continue in the industry, and we continue to get larger pigs in the next 10 to 15 years, we don’t have to worry about the quality being negatively impacted. If anything, we could improve the tenderness of the pork just by having these animals naturally get bigger as they will over time.”

He adds: “Overall, that’s good news for the consumer. They have the ability to know with confidence that the pork they are purchasing today will be just as tender, if not more tender, in the future as they continue going. So it really is a positive for consumers.”

Hard choices in the heartland