Home / California / Study examines methane-inhibiting additive in dairy cow feed
A new user experience is coming! We'll be asking you to login to your Morning Ag Clips account March 1st to access these new features.
We can't wait to share them with you! Read more here. 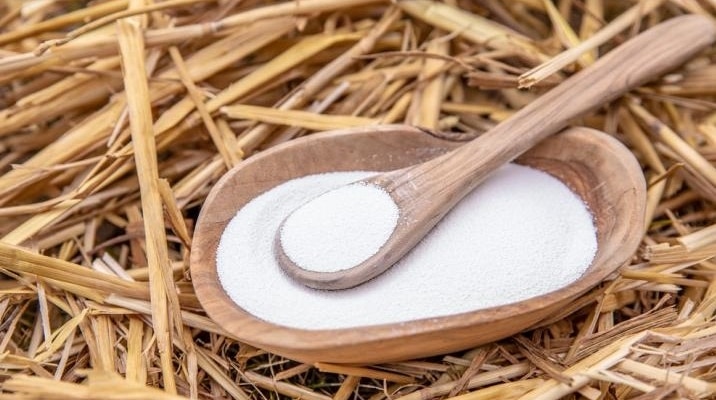 3-Nitrooxypropanol inhibits an enzyme that is crucial to the final stage of methane synthesis in a cow's rumen. When this compound is fed to cattle, their methane production is inhibited. (Photo: DSM)

CENTRE CO., Pa. — The optimum amount of a methane-inhibiting supplement in dairy cattle feed has been determined by an international team of researchers, indicating that widespread use of the compound could be an affordable climate change-battling strategy, if farmers embrace it.

Previous studies conducted at Penn State and around the world showed the addition of 3-Nitrooxypropanol — often referred to as 3-NOP — to the feed of dairy cows reduced their enteric methane emissions by about a third. This follow-up research showed that the optimum dose of the white, granular compound made by Dutch health and nutrition giant DSM is 150 mg/kg –about a tablespoon in every 250 pounds of dry feed.

“The maximum mitigation effect was achieved with the three highest 3-NOP doses tested — with no statistical difference among 100, 150 and 200 mg/kg,” said researcher Alex Hristov, distinguished professor of dairy nutrition in Penn State’s College of Agricultural Sciences. “The decrease in methane emission yield in the study ranged from 16 to 36%, and emission intensity reduction ranged from 25 to 45%.”

3-NOP is the only substance that has worked significantly in reducing enteric methane in cattle and not had unacceptable effects on milk production or quality, added Hristov, who has experimented with many feed additives in recent years.

DSM, which has a patent on 3-NOP, has already applied to European regulators for authorization to sell the compound as a cattle feed additive. The company hopes to launch the product in the European Union soon, followed by registrations in other regions such as Brazil, Australia, New Zealand and Canada. U.S. approval, if it is granted, will come slower because 3-NOP is considered a drug here and will be regulated by the Food and Drug Administration.

In this research conducted at Penn State’s Dairy Teaching and Research Center, recently reported in the Journal of Dairy Science, 49 lactating cows were alternately fed rations containing no 3-NOP, and 40, 60, 80, 100, 150 and 200 mg of 3-NOP per kilogram of feed dry matter. Importantly, according to Hristov, dry matter intake and milk yield of the cows was not affected by 3-NOP. As a bonus to the methane mitigation, milk fat concentration and yield increased.

Methane — a natural byproduct of digestion in ruminants — is released by cows into the atmosphere mostly through belching. So, the results of 3-NOP trials are viewed by many scientists as critical, if the carbon footprint of dairy and beef cattle production is to be reduced to help slow climate change, explained Hristov.

The climate-change contribution of methane from cow burping — often incorrectly characterized as cow flatulence — has been the subject of considerable derision within the U.S. However, it is taken seriously in other countries, Hristov pointed out, because the average dairy cow belches approximately 350 pounds of the potent greenhouse gas each year.

“But greenhouse gases from animal agriculture are just 5% of the total greenhouse gases produced in the United States — much, much more comes from the energy and transportation sectors,” he said. “So, I think it’s a fine line with the politics surrounding this subject. Do we want to look at this? I definitely think that we should, and if there is a way to reduce emissions without affecting profitability on the farm, we should pursue it.”

It is also a matter of improving the overall efficiency of producing milk or meat, he added.

For farmers to use 3-NOP, it must be economical, Hristov noted, so the research showing that relatively low dosages are effective indicates it may be, although DSM has not set a price on the feed supplement yet.

But the question remains — will the public accept it? “It’s a very small synthetic molecule that is metabolized quickly and falls apart into compounds that are naturally present in the rumen of the cow,” he said.