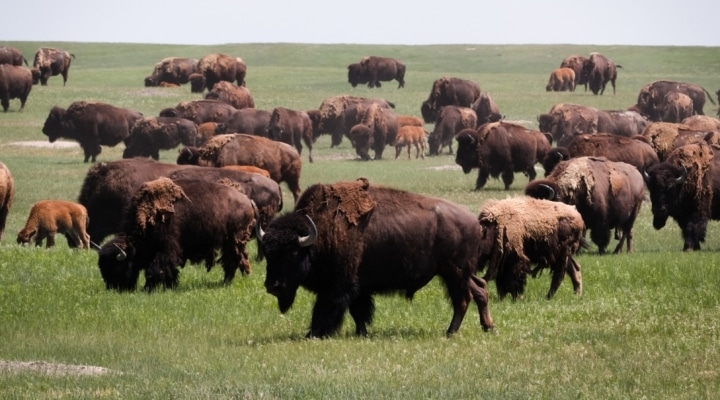 “The buffalo is important to Indian communities, to our people culturally and ecologically to our lands,” said Ervin Carlson, president of the InterTribal Buffalo Council and Blackfeet buffalo manager. “We know bringing them back will not only heal our people but also help us with the changes we see on our grasslands due to drought. And for Buffalo Nations to be successful, we need funding support for Tribal research partnerships and for the buffalo that our communities benefit from.” (Stephen Pedersen/Unsplash)

BROOKINGS, S.D. — A study published today [January 28, 2022] in Frontiers in Ecology and Evolution found that widespread restoration of bison to Tribal lands throughout the Northern Great Plains can help restore the prairie ecosystem while improving the long-running issue of food insecurity and food sovereignty for Native Nations, and may help to mitigate adverse impacts to traditional agricultural systems due to climate change.

“The buffalo is important to Indian communities, to our people culturally and ecologically to our lands,” said Ervin Carlson, president of the InterTribal Buffalo Council and Blackfeet buffalo manager. “We know bringing them back will not only heal our people but also help us with the changes we see on our grasslands due to drought. And for Buffalo Nations to be successful, we need funding support for Tribal research partnerships and for the buffalo that our communities benefit from.”

More than 30 million bison once roamed North America. As a major source of meat and hides in the United States, bison formed the basis of the economy for numerous Plains Indian societies. In the late 19th century, the U.S. government encouraged mass hunting of bison in an organized effort to destroy the livelihood of Plains Indians. By the late 1800s, fewer than 1,000 bison were left and all Plains Indians were forced onto reservations, a feat made possible in large part due to the disappearance of bison, their primary food source.

After bison populations disappeared from the prairies, unanswered questions remained about how bison behave in large groups and their migration patterns across the vast landscape. The complex grassland system is created and maintained by variations in climate, soil, topography, fire and animals that physically modify their environment in a way that provides new habitat for other species. As megaherbivores, bison create landscape diversity through grazing, trampling and wallowing (rolling on the ground), which helps support hundreds of prairie animals, from the prairie dog to the pronghorn.

“Buffalo are central to our community,” said Daniel Kinsey, co-author and faculty at the Aaniiih Nakoda College. “Fort Belknap reintroduced buffalo in the late 1970s, and we are fortunate to have such a successful program that is a product of hard-working people. It is my duty to connect our students, the younger generation, to the buffalo and the ecosystem and to work with students to incorporate our traditional knowledge into the present research. We recently established a new ʔíítaanɔ́ɔ́nʔí/Tatag ́a (bison in Aaniiih and Nakoda languages respectively) Research and Education Center for this purpose.”

The historically broad distribution of bison suggests they can adapt to a variety of conditions, making them resilient to a wide range of management systems and climates. Bison are tolerant of extreme heat and respond to warming and drought by changing their diet and losing body mass. They seek shade and water less frequently than cattle, which in turn reduces sediment load in grassland streams. Under current grazing managements, bison enable vegetation to regenerate, increasing the capacity of the ecosystem to support people and wildlife throughout seasonal and long-term droughts that are increasing across the region.

Climate change is causing the Northern Great Plains to warm and dry disproportionately relative to the rest of the United States. Agricultural production across the grasslands will become less and less sustainable, both ecologically and economically. With a lack of resources to prepare for an uncertain future, communities with persistent poverty who live and rely on the prairie are more vulnerable to climate change.

“With challenges currently presented by climate change and those expected, the best adaptive solutions are those that work for you, your land, and your situation,” said Jeff Martin, Director of Research for the Center of Excellence for Bison Studies at SDSU. “What we provide in this research article are successful solutions that are implemented on Indigenous lands. Many of those solutions may be applicable on other properties and some may not. The key is maintaining a high level of diversity and innovation to enhance sustainable solutions to climate change impacts. The Center of Excellence for Bison Studies aims to continue to support diverse, innovative, and precision research and practices for all bison stewards.”

In rural Native American communities, poverty is two to three times higher than in white rural communities, and, despite much of the grasslands being used for agriculture, Native Americans are twice as likely to be food insecure than white people and are 25% more likely to remain food insecure in the future. While often vast in size, reservations are marginal in land quality, leading to increased reliance on the U.S. Department of Agriculture’s Food Distribution Program on Indian Reservations and non-Tribal operators having a large role in food production.

Over the past few decades, Tribes have worked toward the reclamation of food security (having available and accessible food) and sovereignty (ability to access healthy and culturally appropriate food). For Plains Indians, food sovereignty is directly tied to reestablishing bison herds within their reservations and traditional lands.

“We are renewing our relationship with the buffalo as our relative, they are central to our lives,” said Roxann Smith, co-author and member of the Pt’e stakeholder group, Fort Peck Indian Reservation. “Together, our community is reclaiming our traditional ways and piecing our ecosystem together again as we heal together.”

“Prairie species evolved alongside bison, an iconic animal central to Plains Indian culture and communities for centuries,” said Hila Shamon, lead author and an ecologist at the Smithsonian Conservation Biology Institute. “Against the backdrop of a changing climate, continued and new research is needed to develop bison restoration and land management strategies that maximize biodiversity and address the complex socio-economic and ecological needs of Native Nations. Our paper provides actionable recommendations and shows the indisputable connection between conservation and culture.”

The case studies on existing Tribal bison restoration programs developed for this paper explore management structure, habitat suitability, economic development, community engagement and access, finding successes as well as areas of improvement for the future. Each program’s overarching goals are to enhance the ecological, cultural and economic sustainability of the people and lands; draw on Indigenous science and facilitate the continuity of traditional knowledge; engage Native youth in buffalo restoration efforts; and restore food sovereignty.

“This paper demonstrates how critical bison restoration is to the health and livelihoods of Tribal Nations and the Northern Plains prairie ecosystem,” said Chamois Andersen, co-author and senior Rockies and Plains representative at Defenders of Wildlife. “With the diversity of authors on this paper, it is our hope we will be able to garner significant support for sustaining tribal buffalo programs well into the future.”

Efforts led by Native Nations to restore bison to Tribal lands can have the desired socio-economic benefits to underserved communities while improving their capacity to influence the health of their lands, their people and their livelihoods. All approaches depend on community support and robust expansion of staﬀ, infrastructure and funding.

The Center of Excellence for Bison Studies (www.sdstate.edu/bisoncoe) is a partnership between South Dakota State University, the National Bison Association, and the National Buffalo Foundation. Headquartered at SDSU’s West River Research and Extension Facility in Rapid City, South Dakota, the Center focuses on research, Extension, and educational activities to improve bison herd health and the economic viability of both private and tribal bison producers.