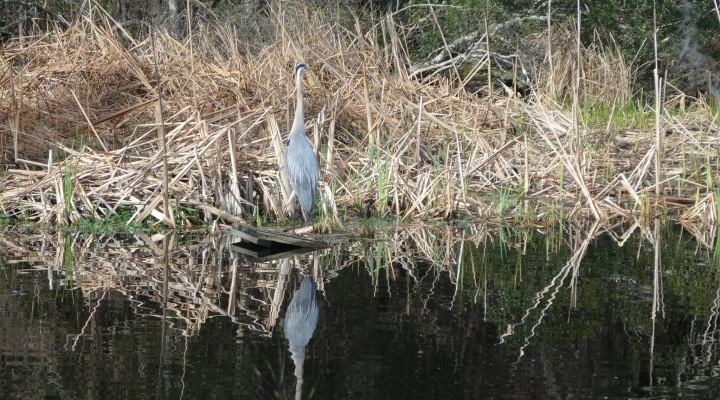 Mercury contamination has been a problem in Virginia’s South River since 1979, when mercury was discovered in the river. Mercury was used in industrial processes at the former DuPont Plant in Waynesboro, Virginia from 1929 to 1950 and in the early 1980s, the Virginia Department of Health issued advisories for fish consumption along the South River. (photo by denisbin, creative commons/flickr.com)

NEWARK, Del. — Mercury contamination has been a problem in Virginia’s South River since 1979, when mercury was discovered in the river. Mercury was used in industrial processes at the former DuPont Plant in Waynesboro, Virginia from 1929 to 1950 and in the early 1980s, the Virginia Department of Health issued advisories for fish consumption along the South River.

Renewed efforts to address the legacy mercury contamination in the river began in 2001 when the DuPont Company and various Virginia regulatory agencies established the South River Science Team (SRST). The SRST began to apply a watershed-level, risk-based assessment process to assess why mercury concentrations remain elevated in the South River and what might be done to remediate it.

In 2004, University of Delaware Professor James Pizzuto began work with the SRST looking at mercury contamination in the South River. Now, 16 years later with funds secured to continue research through 2022, that work has led to 14 publications, with four doctoral students and six master’s degree students having gained hands-on research experience working on the project.

Pizzuto said that the work couldn’t have been completed without the help of his faculty colleagues in the Department of Earth Sciences in UD’s College of Earth, Ocean and Environment. Professor Michael O’Neal helped Pizzuto by conducting research on the 25 miles of river through the use of remotely sensed data from lidar and aerial photography. Professor Neil Sturchio and Kyungsoo Yoo, a former assistant professor at UD who now works as a professor at the University of Minnesota, Twin Cities, also helped Pizzuto on the project.

Mercury contamination
When mercury was discovered in the river in 1976, studies were undertaken that showed the mercury was dispersed among several environmental compartments including floodplain soils. The response plan was to monitor the system, including the fish, to evaluate whether the mercury concentrations would attenuate at the rate shown in watershed modeling.

“They did that until almost 2000, and they noticed that the mercury contamination in the fish was not getting any better. In some places, it was getting worse,” said Pizzuto. “So they decided that they needed to ramp up their research.”

At that point, all that was known was that there was mercury in the fish, but the pathway for how the mercury got into the fish was still unknown. The researchers surmised that there must be an ongoing source of mercury, and the SRST began to investigate potential sources.

“They asked me to start working on it, and over the next few years, they got a raft of consultants and they hired a lot of academics and other experts to look at the biota, some of the geochemical cycling, and lots of different aspects of the problem,” said Pizzuto, who studies rivers, how they behave and what they carry, mostly involving sediment.

In this case, Pizzuto is looking at the mercury that is attached to the sediment in the river, the movement of sedimentary particles through the watershed and the implications of that for river restoration, watershed management and geological problems.

Pizzuto, his team and other scientists began monitoring and collecting data and gradually began coming up with some ideas as to the source of contamination in the South River. They discovered that one significant ongoing source of contamination was related to the fact that the mercury has a high affinity for solids and mercury in plant site discharges had attached itself to fine sediment particles.

“During floods, these particles can get deposited on the flood plain, and after that happens, they’re just sitting there,” said Pizzuto. “Then, as rivers do, the river erodes its banks and recycles that material, and it goes back into the stream. So the whole flood plain is this vast reservoir of sediments contaminated with mercury that the river is continuing to access.”

Studies also showed that some bank soils contained higher mercury concentrations than the floodplain soils.  Pizzuto’s team spent a number of years documenting that problem and discovered the supply of mercury from that source was large enough to account for the contamination found in the river’s fish.

Current work
With the data collection in hand, the SRST has started to move from the scientific phase of the study into a remediation plan to try to protect the banks so that the river can no longer access those contaminated sediments. They have started upstream and are working their way downstream, monitoring along the way to see if the remediation plan is working.

“It’s quite an experiment, nobody has ever cleaned up a river valley with this level of contamination successfully before,” said Pizzuto.

Pizzuto’s role now is to help them with the monitoring. While Pizzuto said the SRST members feel like they’re going to be successful in limiting the ongoing mercury source from river bank erosion, there’s still contaminated mercury in the river bottom sediments.

“They want us to tell them how long it will take for the river to clean out its river bottom and how that stuff will progressively move downstream and hopefully leave the area,” said Pizzuto. “So now they’re back to the self-cleaning hypothesis but only in a limited part of the system.”

Pizzuto will monitor the river bottom sediments through 2022 and said that it’s a difficult thing to study because there isn’t an agreement on the proper methodology.

They are trying to create controlled outdoor experiments — called mesocosms — with samples containing river bottom sediments and seed the samplers with small sediment particles that the mercury attaches to in the river bed. The samplers are then placed into the river to see how long it takes for the river to remove the particles that they put into the containers. From that information, they are hoping to develop relationships that can hopefully apply to the whole river.

They are currently collecting background information on where to put the mesocosm samplers in the river.

“We have to know a lot about the river in order to interpret the results that we get so we’ve been doing a lot of mapping and hydrodynamic modeling and sampling, and we’ve had to design these samplers from scratch so we’re still working on them,” said Pizzuto. “We should be ready to put them out in the future and they’ll sit there in one form or another for probably a couple years as we watch to see what happens to them.”