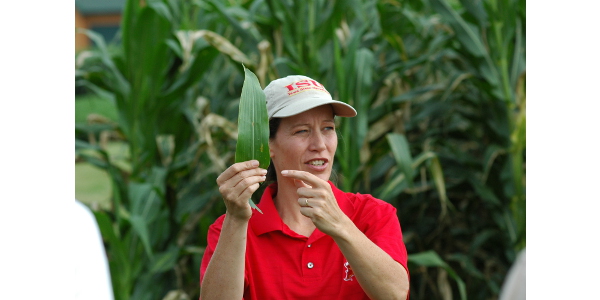 AMES, Iowa — Improving the odds of a successful cash crop after cover crops is the aim of several new projects funded by the Iowa Nutrient Research Center at Iowa State University.

“Based on strong farmer interest and input from our center advisory committee, almost a third of this year’s $1.7 million in project funding will support research to understand how to best integrate cover crops into Iowa crop and livestock systems,” said Matt Helmers, director of the Iowa Nutrient Research Center and professor of agricultural and biosystems engineering at Iowa State. “Since the center was established in 2013, we’ve funded about a dozen research projects linked to cover crops.”

Planting cover crops is a conservation practice that is a linchpin of the Iowa Nutrient Reduction Strategy, adopted in 2013. One way to achieve the strategy’s goals is to expand the use of cover crops to approximately 12 million acres, so they can soak up excess nutrients, keeping them out of streams and drainage tiles and ultimately reducing nutrient levels flowing to the Gulf of Mexico.

In addition to improving water quality, cover crops can build soil health, provide livestock feed and reduce weed pressure in fields. However, because they can be hard to manage, expensive and pose risks to the following crop, there is still a lot of research needed to address the challenges.

“If farmers have a good year growing cover crops, they can get really excited and plant more acres. But if they have a bad year, they might never use cover crops again,” said Alison Robertson, professor of plant pathology and microbiology and a lead investigator of cover crop projects funded by the Iowa Nutrient Research Center.

“These research projects will help build our understanding of how cover crops relate to factors like disease, insects, nutrient cycling and crop response,” Robertson said. “It’s all about finding the right strategies, so that cover crop users can succeed most of the time.”

One new project led by Robertson will investigate the impact of spatial planting arrangements of winter cereal rye to reduce “yield drag” when corn — which is basically, a robust, well-bred species of grass — follows another grass species used as a cover crop. Cereal rye harbors insect and disease problems that may spill over into the next corn crop. Cereal rye has become a popular cover crop in the Midwest because of its winter hardiness and its ability to become established when planted in late fall after the previous crop is harvested.

Preliminary research in the greenhouse by Robertson and others found that, when planted closer to terminated rye crowns, corn seedlings were shorter and more susceptible to plant disease. The scientists concluded that “proximity matters.” As a follow-up, Robertson’s team is looking more carefully at the influence of physical distance and planting methods.

One way to manage proximity in fields would be to plant corn into a “cover crop-free zone.” That is the focus of another newly funded Iowa Nutrient Research Center project led by Mark Licht, assistant professor of agronomy. Licht and colleagues will look at possible advantages of leaving narrow bands of space between rye and corn seedlings using strip tillage. They also will monitor the potential disadvantages of a cover crop-free zone. For example, leaving more bare soil in the row could be an open invitation for weeds to grow, negating the weed suppression benefits cover crops can provide.

Licht’s study will also will look at whether using a starter fertilizer can boost corn seedling vigor enough to ward off potential yield decreases related to the rye.

A third, multidisciplinary project led by Robertson and Licht will research cover crops from many angles, based on data collected from the same field experiments. The team includes agronomists, a plant pathologist, a weed scientist, a sociologist, an entomologist, an economist and an engineer, who will quantify the effect of cover crop seeding rates and planting methods on corn growth, weed, insect and disease issues, soil health, water quality, economic returns and farmer attitudes.

“Taking a systems approach to investigate various interactions is more likely to reflect farmers’ real-world benefits and barriers,” says Robertson. “So much work on cover crops has been done inside each of our own academic areas, it will be exciting to see what we may be able to learn by working together from multiple perspectives.”

Another cover-crop project funded this year, led by Dan Loy and colleagues at the Iowa Beef Center at Iowa State, will evaluate the forage value of an oat-rye cover crop mix. They will use their data to refine a decision tool to help farmers more accurately predict the costs and benefits of grazing cover crops.

The Iowa Nutrient Research Center, established in 2013 with support from the Iowa Legislature, pursues science-based approaches to evaluating the performance of current and emerging nutrient management practices, providing recommendations on implementing the practices and developing new practices. The center has supported 76 research projects, led by scientists at Iowa State University, the University of Iowa and University of Northern Iowa, often in collaboration with other agencies, organizations, cities, farmers and landowners.

Dairy Design Workshops to be held this spring
February 26, 2020