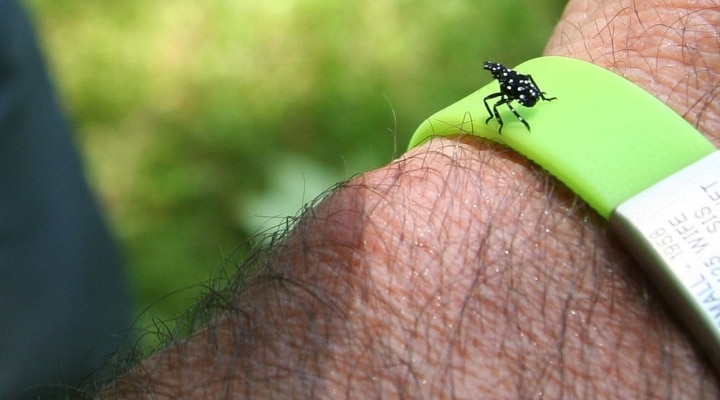 The “Squish Squad” of CBF student leaders in Pennsylvania is joining the effort to contain and eradicate the invasive Spotted Lanternfly, that does devastating damage to trees, vines, and plants. Photos by B.J. Small/CBF

HARRISBURG, Pa. — The same Chesapeake Bay Foundation (CBF) student program that helped protect the hellbender, the largest salamander in North America by getting it named Pennsylvania’s official state amphibian, has turned its attention to helping squish one very bad bug. 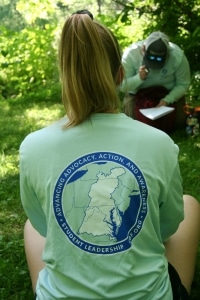 A total 34 counties in the Commonwealth are under quarantine by the state Department of Agriculture, so residents and businesses can learn how to stop the spread of the insect that damages trees, vines, and plants. According to the department, a 2019 economic impact study conducted when the Spotted Lanternfly had spread to just 14 counties, estimated that, if uncontrolled, the insect could cost Pennsylvania up to $324 million annually and 2,800 jobs.

“We’re pleased to see youth putting their creativity and enthusiasm toward protecting our state’s vital economic and natural resources,” Pennsylvania Agriculture Secretary Russell Redding said. “Young people are the bright future of agriculture, and we need what they bring to the table. I’m excited to see what the Squish Squad dreams up to help stomp out Spotted Lanternflies.”

The Squish Squad is using the three-pronged approach of advocacy, awareness, and action in its campaign against the Spotted Lanternfly. The effort by high school students complements a plethora of approaches already in place throughout the Commonwealth prepared to pulverize the pests that first showed up in Pennsylvania in 2014.

“There are a lot of students in parts of Pennsylvania’s portion of the Chesapeake Bay watershed that are not in the quarantine, so it’s important to raise awareness about the importance of making sure that if members of their community see a Spotted Lanternfly, they know what it is, what to do, who to contact and why it is bad for Pennsylvania agriculture,” said Kassie Fenn, CBF’s Student Leadership and Education Manager in Pennsylvania.

CBF student leaders are known for spearheading a three-year campaign of advocacy, awareness, and action that led to the Eastern hellbender being designated as Pennsylvania’s official state amphibian in 2019.

The students’ successful campaign was designed to protect the salamander and increase awareness of the critical need to reduce pollution in the Commonwealth’s rivers and streams. Hellbenders are an indicator species for clean water, their dwindling numbers survive where there is cold, clear, swift-running water.

On the Squish Squad’s first educational and scouting trip earlier this summer in Lancaster County, students found a few Spotted Lanternflies in their black and white-spotted nymph stage, charted the insects’ locations, and then squashed them. Students also spent time learning more about the insects and planning activities for late summer and fall.

The Squad plans to partner with county conservation districts and nature preserves. They also want to lead workshops on how to build Spotted Lanternfly traps using materials found around the home.

A project working group is taking photos of Spotted Lanternflies in various life stages for a pamphlet the students plan to produce.

“The spotted lanternflies aren’t particularly picky, so you are going to find them on native species that we are planting to serve as streambank support and runoff filters,” Fenn added. “They are going to spread unchecked unless we do something about it.”

CBF’s Student Leadership Program and participation in the Squish Squad is open to high school students and is designed to give them a voice and an active role in clean water efforts in Pennsylvania.

For more information about the Spotted Lanternfly, visit agriculture.pa/gov/spottedlanternfly.

Saddle up! The Equine Experience is back at Ag Progress Days

Be on the lookout for spotted lanternfly
September 15, 2021