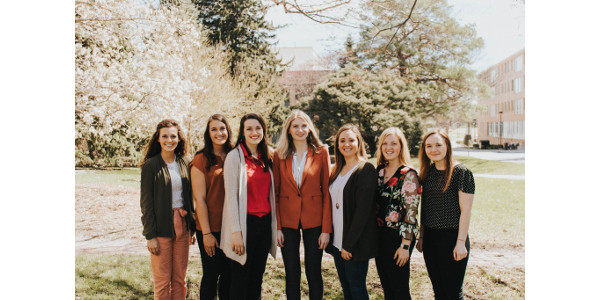 LINCOLN — Seven students from various colleges and universities are beginning summer internship programs supported by the Nebraska Corn Board and the Nebraska Corn Growers Association. Although these internships may vary in scope and location, each are designed to provide students with an overview of Nebraska’s corn industry through real-world professional examples and experiences.

“Nebraska Corn’s internship program has been a great way to provide college students with real-world experiences in the agricultural industry,” said Kelly Brunkhorst, executive director of the Nebraska Corn Board and the Nebraska Corn Growers Association. “Through seven different internship experiences, we’re able to help students see how vast our state’s corn industry can be. We know our students are the next generation of our industry, so we want to be sure to expose them to important topics such as policy, promotion, communication and international trade.”

The National Corn Growers Association (NCGA) is hosting two of the interns. Alyssa Jones is majoring in communication studies and political science at the University of Nebraska-Lincoln (UNL). She is interning with the NCGA office in Washington, D.C. Emily Keiser is interning with the NCGA office in St. Louis, Missouri. Keiser is majoring in agricultural education, communication and leadership at South Dakota State University.

“I applied for this internship because I wanted to expand my knowledge of the production side of the agricultural industry and focus on policy issues,” said Keiser. “I also appreciated the action NCGA takes to inform members and consumers about the current changes and actions of the industry that shape the industry as a whole.”

Amanda Kowalewski is interning with the U.S. Meat Export Federation (USMEF) in Denver, Colorado. Kowalewski is majoring in agricultural economics at UNL.

Two students are interning with the U.S. Grains Council. Cheyenne Gerlach is working at the international headquarters in Washington, D.C., and Sierra Richey is gaining international experience in the Panama City office. Gerlach is studying integrated sciences at UNL and Richey is majoring in international business and Spanish at Nebraska Wesleyan University.

“Throughout my time with the U.S. Grains Council, I hope to gain more of an understanding of the way the United States works with its international partners to accomplish the best deals for not only our farmers, but also for producers and consumers across the globe,” said Gerlach. “I’m looking forward to immersing myself in the D.C. community and absorbing as much information on U.S. grains as possible. I am so grateful to get to represent Nebraska corn and its producers this summer.”

Two of the internships are year-long experiences and are located in Lincoln, Nebraska. Isabelle Stewart is an agricultural education major at UNL and is interning with the Nebraska Corn Board. Morgan Leefers is majoring in agricultural business at UNL and works with the Nebraska Corn Growers Association. Both internships assist with the coordination of communications and promotional efforts with their respective organization.

“I’ve heard great things about all of the internships with Nebraska Corn,” said Leefers. “Last year, I saw a presentation from one of the past interns and she was so passionate about her experience. I thought it seemed like a great opportunity to learn more about something I’m interested in: agriculture!”

In addition to the students gaining real-world experiences throughout the summer and helping fulfill the duties and missions of their respective organizations, the interns are also able to gain valuable insight on possible future careers.

“I am not sure what my future path holds yet, but I know that it involves agriculture and communicating with others,” said Stewart. “I feel as this is going to be a very good opportunity in preparing me for some of the many career choices I am considering.”