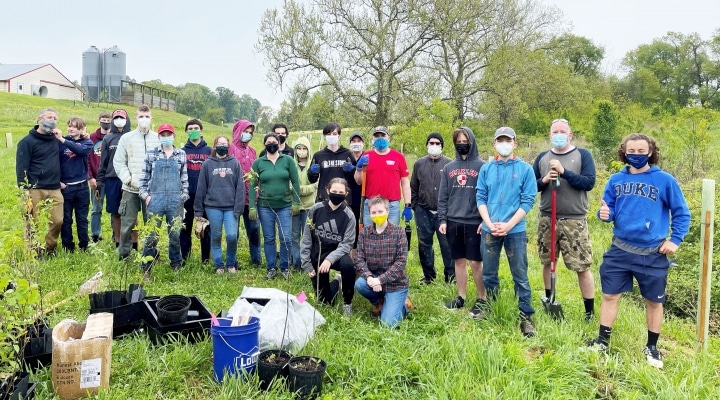 HARRISBURG, Pa. — The Stone Independent School in Lancaster is making a “Big Do” out of bringing trees and tunes to Lancaster County.

Students at the private school are coordinating the planting of 5,000 trees by June 5, when the project dubbed “The Big Do” will celebrate conservation and a concert with a six-band, live show at Penn Cinema, 541 Airport Road, Lititz.

“One of the values at the school is to make the world a better place and I don’t know how you can make the world measurably better than by planting trees,” said Maxwell Davis, a senior at the private school and organizer of “The Big Do.” “We’ve got really significant environmental problems in Lancaster and that really moved me,” Davis added. “We were thinking about how we can do something and create as much change as possible.”

“The Big Do” is nearly halfway toward its goal of planting 5,000 trees and volunteers are welcome to help at future public plantings. In addition to Lancaster County, one is planned for East York. The project is also working with private landowners to plant trees.

The Keystone 10 Million Trees Partnership, coordinated by the Chesapeake Bay Foundation (CBF) is providing trees for “The Big Do.” The partnership’s goal is to plant 10 million trees in the Commonwealth by the end of 2025. Trees are one of the most cost-effective tools for reducing polluted runoff into local waters. They also sequester carbon which is important for cleaner air and mitigating climate change.

“We really appreciate that students at the Stone Independent School are taking an active role in improving and protecting their local environment by planting trees,” said Shannon Gority, CBF Executive Director in Pennsylvania. “These young people set a fine example for the rest of us.”

Davis said he hopes “The Big Do” will be an annual event and doubles the number of trees planted every year.

The concert on June 5 is open to the public. Bands scheduled to perform include The Districts, Laddie Moran, Big Boy Brass, the Neilsen Family Band, Bus, and Brad Armstrong.

“We want to incentivize as many students as possible to plant trees and any student who plants a tree gets half-off a ticket to the concert,” Davis said. He credits two other students with helping to organize plantings and production of the concert, and Mike Simpson, the Head of School, for being a mentor and playing a key role.

To register to help at a tree planting, for more information, and tickets visit www.thebigdo.org.