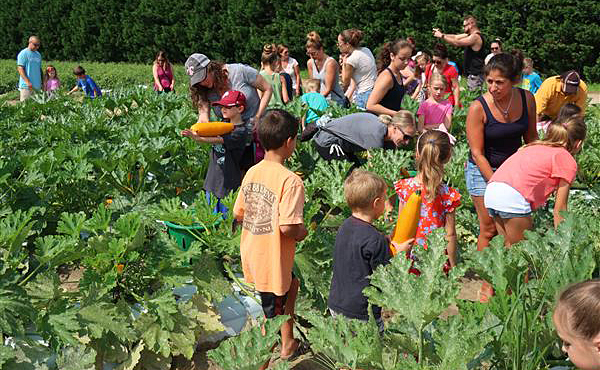 The picking session, one the most bountiful ever, was the culmination of the District's annual "Student Farmers Grow and Give" program, which is coordinated by Duffield and District elementary supervisor Beth Hinman. (Washington Township Public Schools)

SEWELL, N.J. — “This is some of the most beautiful squash we’ve ever grown,” a proud Tracy Duffield of Duffield’s Farm told a group of rising third-graders from all six of the Washington Township Public Schools’ elementary schools, who gathered on the farm on July 10 to help harvest more than 20,000 pounds of green and yellow squash. The picking session, one the most bountiful ever, was the culmination of the District’s annual “Student Farmers Grow and Give” program, which is coordinated by Duffield and District elementary supervisor Beth Hinman.

Four large boxes of the harvested squash stayed in the Washington Township community through a donation to Mother’s Cupboard. The rest of the harvest will be donated to “Farmers Against Hunger,” an organization that partners with 40 to 50 farms in the state to donate homegrown fruits and vegetables to communities in need through soup kitchens and food banks.

The students’ community service effort drew the attention of local media and Al Murray, executive director of New Jersey Agricultural Society, who was on hand to congratulate the students and accept their donations.

“The New Jersey Agricultural Society was founded in 1781,” Murray said. “It’s one of the oldest organizations in the United States and has been around since George Washington. Our main mission is to educate the public about agriculture, and to promote an appreciation for agriculture. One of our most important programs is Farmers Against Hunger. We are thrilled that one — you have learned about agriculture and the hard work goes into farming; two – that you actually planted the squash and that you are now seeing what harvesting is all about; and three — that you are learning about community service. There are lot of people in New Jersey who go hungry every day, and who don’t have enough food. Our program feeds about 7,000 people each week. It’s so great that you are helping your neighbors, particularly at this age, and I hope that this leads to a lifetime of service to help your fellow citizens.”

Duffield visits all second-grade classrooms as part of the District’s science curriculum, sharing the book Seeds, Soil, Sun, which explains the basics of planting and growing. The second-graders then plant squash seeds in early May, transport the plants into the field at Duffield’s in early June, and harvest the healthy crop in July. The program began in 2001.

The students worked their way through the rows of planted squash, twisting and snapping off large squash from the plants, carrying them in baskets and adding them to large bins that were then loaded on to the Farmers Against Hunger truck. Following their labor, all participants were treated to water ice in one of the farm’s tents.

Nature offers clues when fruit is ready to pick

The complicated world of cross-pollination
September 19, 2019