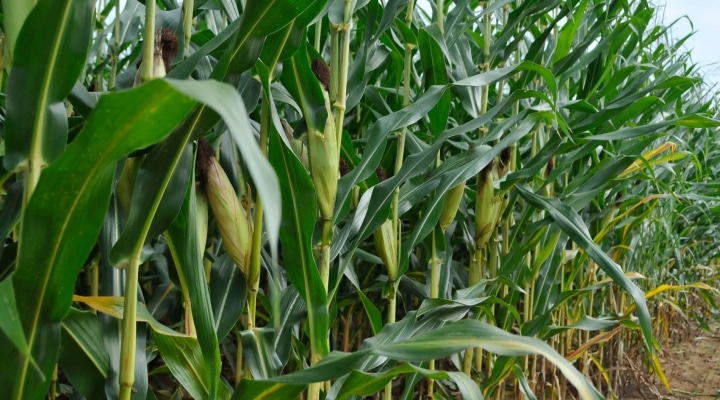 CLEMSON, S.C. — Corn is one of the most important cereal crops in the world.

But stalk lodging destroys up to one-quarter of the U.S. corn crop each year. Stalk lodging is breakage of the stalk at or below the ear. when Last August, a derecho — a straight-line windstorm with hurricane-force winds — destroyed 8.2 million acres of corn in the Midwest and caused approximately $2 billion in losses to the agricultural industry.

“These losses could be prevented through genetic improvement of lodging resistance,” said Kumar, a postdoctoral researcher in the laboratory of Department of Genetics and Biochemistry assistant professor Rajandeep Sekhon. “A comprehensive understanding of the genetic architecture of stalk strength is crucial to reduce yield losses due to stalk lodging.”

In his study, Kumar compared two populations of maize developed through multiple cycles of recurrent selection for high and low rind strength. Using selection mapping, the scientists identified the DNA signatures differentially selected in the two populations. Kumar and his collaborators combined the results with transcriptome and metabolome data to identify about two dozen key candidate genes that are likely to determine stalk strength.

Kumar is growing three or four of the mutants in the field now. He will analyze their phenotypes and determine how they affect stalk strength.

“Genetic dissection of a trait to identify the underlying genes is the initial step of genetic improvement,” he said. “Our study can be a useful resource for understanding the genetic architecture of stalk strength and, therefore, stalk lodging resistance in maize.”

The research could eventually improve grain yield, which is vital in a world where food production must double by 2050 to sustain the world’s ever-growing human population. Besides being food for people and animals, the crops are also used for biofuels and various industrial products.

“Our research is contributing to the goal of achieving food security,” he said.

Kumar and his collaborators’ research titled “Genetic Architecture of Maize Rind Strength Revealed by the Analysis of Divergently Selected Populations” was published in Plant & Cell Physiology.

The College of Science pursues excellence in scientific discovery, learning and engagement that is both locally relevant and globally impactful. The life, physical and mathematical sciences converge to tackle some of tomorrow’s scientific challenges, and our faculty are preparing the next generation of leading scientists. The College of Science offers high-impact transformational experiences such as research, internships and study abroad to help prepare our graduates for top industries, graduate programs and health professions. Clemson.edu/science