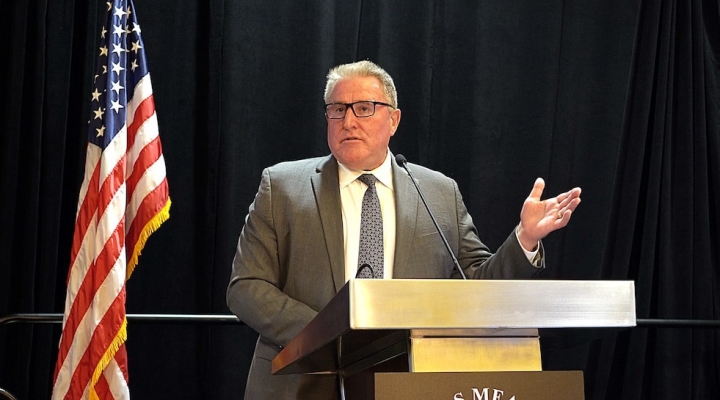 "To date, demand for U.S. red meat has been as strong as I've ever seen in all my years in the meat business, and remarkably resilient," said USMEF President and CEO Dan Halstrom. "But the question in my mind is, at what point do these inflationary pressures start to constrict disposable income for the global consumer? At what point will we see a crack in demand?" (Courtesy Photo)

DENVER — The U.S. Meat Export Federation (USMEF) Spring Conference got underway Wednesday in San Antonio, attracting a diverse range of participants including pork, beef, lamb, corn and soybean producers, as well as packers, processors, exporters and traders from throughout the United States.

USMEF Chair Mark Swanson, who recently founded food safety consulting firm Tru Grit KGMS Enterprises LLC, welcomed attendees and urged them to take the opportunity to visit one-on-one with a strong contingent of USMEF’s international staff from Asia, Mexico, Central and South America, the Caribbean, Europe and Africa. Due to COVID travel restrictions, this is the first time since 2019 that most of these staff members have participated in an in-person USMEF conference.

USMEF President and CEO Dan Halstrom followed with an overview of first quarter red meat export results, which were impressive despite mounting economic and logistical challenges. Halstrom is optimistic that exports will post a strong performance in 2022, but cautioned that across the globe, inflation is definitely pressuring consumer spending power.

“To date, demand for U.S. red meat has been as strong as I’ve ever seen in all my years in the meat business, and remarkably resilient,” he said. “But the question in my mind is, at what point do these inflationary pressures start to constrict disposable income for the global consumer? At what point will we see a crack in demand?”

Halstrom also highlighted foodservice and retail trends that exploded during the pandemic and are likely here to stay, such as takeout ordering from ghost kitchens and grocery sales through e-commerce platforms. He concluded by noting that last year total U.S. red meat exports soared to a record $18.7 billion. While more moderate growth is projected this year, he said exports could approach the $20 billion milestone.

Wednesday’s general session also featured a keynote address from acclaimed author and consultant Peter Zeihan, who described a global geopolitical system that seems headed toward chaos. Zeihan discussed the impact of Russia’s invasion of Ukraine on global agricultural trade and production, as well as its effect on energy supplies and manufacturing. He also focused on how China’s COVID lockdowns have impacted the global economy and highlighted demographic trends and geopolitical issues that are shaping critical world events.

Zeihan sees the relatively stable period of economic growth driven by globalized trade coming to an end, replaced by a new era characterized by labor and supply shortages, an environment of constrained capital and rising inflation. On the agricultural side, these trends are exacerbated by the war in Ukraine as sharply reduced production of wheat and the cost and availability of fertilizer, nitrogen, potash and other inputs will severely limit global food production for an extended period. He projects that food insecurity will rise around the globe and says conditions are ripe for regional famines. Zeihan noted, however, that while American farmers and ranchers face sharply higher input costs, their production and supply chain challenges are not as drastic as in many other regions. So despite significant obstacles, he emphasized that U.S. agriculture is well-positioned for robust growth over the next 10-12 years.

Thursday’s general session will feature a discussion of U.S.-China trade relations, including a look at the market access gains for U.S. red meat achieved in the Phase One Economic and Trade Agreement. Panelists for this session are former U.S. Ambassador to China and longtime Iowa Governor Terry Branstad and USMEF Senior Vice President for the Asia Pacific Joel Haggard.

The conference will conclude Friday with a panel discussion examining creative programs USMEF has designed in emerging markets to expand the range of U.S. red meat cuts available in wet markets and butcher shops.

Hay stocks in the Northwest Region up 1 percent from May 1, 2021