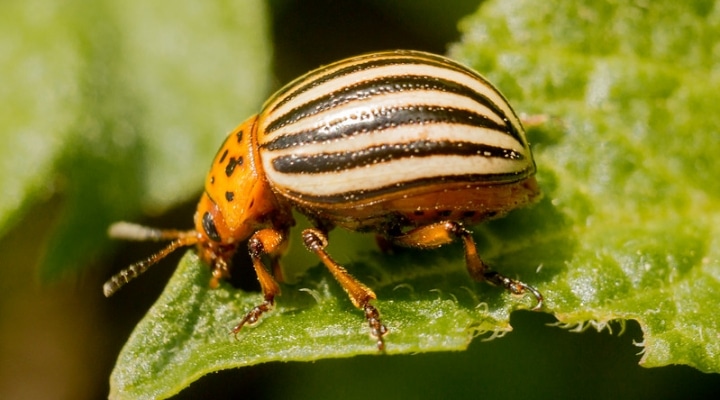 Colorado potato beetles have been a common garden enemy for many years. They feed heavily and lay eggs on potato plants as well as eggplant, tomato, pepper, nightshade and ground cherries. Due to pesticide resistance, it is difficult to control Colorado potato beetles with pesticides alone. (Anton Vakulenko via Flickr/Creative Commons)

LITCHFIELD, Minn. — Striped cucumber beetles are commonly seen in and around gardens beginning in late May. These beetles like to spend winter under leaves or other garden debris to stay protected. They will feed on dandelions and other early flowering plants in the spring until garden host plants become available.

Striped cucumber beetles have yellow bodies with three longitudinal black stripes and a black head and antennae. Cucumber beetles will feed on the blossoms of flowering plants including cucumbers, squash, pumpkins, melons and others. They will also lay eggs at the base of these host plants. Once the eggs hatch they will feed on the roots of these plants underground before making their way up through the soil and feeding on the plants above ground.

Striped cucumber beetles carry the bacteria that can cause bacteria wilt and once the plant is infected it cannot be saved. There are a couple of tips if you are having issues with cucumber beetles or want to prevent them from harming plants. Placing a thick layer of mulch around plants will discourage egg-laying near the base of the plant. In addition, beetles overwinter under leaves and garden debris so it is good to remove debris from the garden area so they will be forced to overwinter in a different location.

These beetles are distinguishable by their orange/yellow oval bodies with ten black longitudinal stripes. Female beetles can lay around 350 eggs during their adult life which can last several weeks. Egg clusters are orange and are found on the undersides of leaves. Larvae are red to orange in color with black heads and black spots on the sides of their bodies.

Early in the summer, plants can stand up to 30% defoliation from Colorado potato beetles, while later in the summer when the potatoes are bulking up underground plants can only handle around 10% defoliation. To help limit the damage caused by potato beetles, it is good to keep the garden clean, pick beetles and eggs off of plants and use pesticides especially if you have a larger infection.