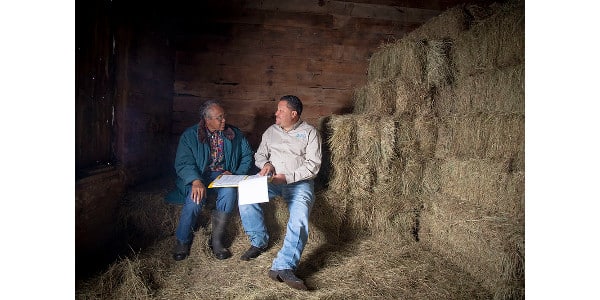 Natural Resources Conservation Service (NRCS) District Conversationalist Nicholas Jones speaks with Pat Crenshaw, 79, a black Native American, who owns and operates 120 acres in Slick, Oklahoma. Her father purchased the land through Farmers Home Administration in 1945, a time when it was uncommon for minorities to receive loans through the government. Having lived on the land since 1945 with her parents, she began maintaining the 120-acre ranch by herself since her father passed away in 2001. (USDA photo by Preston Keres)

WASHINGTON — In light of the fact that racial and ethnic minority groups are vastly underrepresented in agricultural professions, National Farmers Union (NFU) and Minorities in Agriculture, Natural Resources and Related Sciences (MANRRS) are working together to foster diversity and inclusion in the field.

During an online ceremony, NFU President Rob Larew and MANRRS National President Dr. Antomia Farrell signed a memorandum of understanding (MOU) summarizing the ways in which their organizations will collaborate to provide educational and leadership opportunities for young people of all racial and ethnic identities, develop federal policy priorities, and extend each other’s reach within agricultural communities.

“Agriculture is a much more homogenous profession than it should be; even though 40 percent of Americans identify as Black, Indigenous, or people of color, just 5 percent of farmers do. This lack of racial and ethnic diversity translates to a lack of new ideas, perspectives, and experiences, which holds back progress and innovation for everyone in farming,” said Larew. “Together with MANRRS, which has been doing the important work of promoting diversity in agricultural spaces for 35 years, we hope to ensure that the next generation of agricultural professionals will be more representative of the American population as a whole.”

The partnership is a natural next step for the two organizations, both of which have long been committed to racial equity. NFU, which has represented racially diverse farmers for more than 80 years, has primarily approached the issue through legislative action; the group was an early supporter of the Civil Rights movement and has backed legal challenges to institutional discrimination against Black farmers. MANRRS, on the other hand, is a national society that offers professional and academic development as well as networking opportunities for ethnic minorities in agricultural sciences and related fields. By leveraging each other’s expertise, NFU and MANRRS hope to strengthen both organizations’ efforts.

“The fact that communities of color are not well represented in agriculture is not because they aren’t interested; it’s often because they don’t have access or exposure starting from an early age. As a result, many young people don’t even know that agricultural professions are an option for them,” Farrell noted. “That’s why MANRRS works to expand academic and professional opportunities for those who might not otherwise have them. In our partnership with National Farmers Union, we look forward to building on that work by offering our members the chance to participate in new educational programs and in grassroots advocacy.”

Farmer who is ‘lucky to be alive’ takes time for safety